House wrens are most likely to nest in cities

“Everything is nearly copacetic. I’ve learned that if a doughnut has fruit in it, it’s good for me. Dreams do come true. Especially the boring ones. I dreamed that I was a breather at the optician’s office. I breathed on the glasses and then another guy wiped them. That was boring enough to be true. I woke up and rejoiced that it was just a dream. I had just sold a pile of aluminum cans and I was feeling as rich as creamed gravy and then it was time to pay my property taxes. The county must think that I don’t own my farm and that I want to buy it. Each year, they send me a bill for the market value. I try to pay my taxes with a smile, but they want money. I was in the hospital.”

“Sort of. I filled out a pile of forms and handed my insurance card to a woman in the admittance office. She asked me for the reason for my coming to the hospital.”

“I told her that I’d come to visit my uncle, but it had taken so long to fill out the forms, that I no longer had the time.” 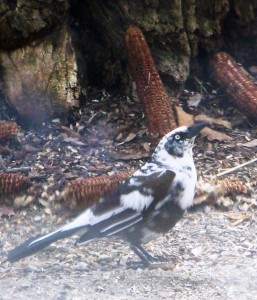 Joyce Street, of Hesper, Iowa, took this photo of a piebald common grackle.

I mowed the lawn. I considered stopping. Red admiral butterflies interrupted their nectaring on dandelions to flutter ahead of the mower. A barn swallow played on the air like Heifetz on a violin. It looked as if it knew how to live. Its “click-it” sounds appeared to be public service announcements advocating seatbelt usage. There were no seatbelts on my lawnmower.

I stopped at a friend’s house to see the robin that has been battling with a window. Her windows have invited fights through the years — everything from robins to cardinals to goldfinches. The current robin shadow boxing with the window was fighting a bird that was not there. It struggled with its own reflection, proving to be its own enemy. What made this robin different is that it had white feathers where it should have had brown. It was a case of leucism. We tend to see it most often in abundant species such as robins, grackles or Canada geese. It was exciting to see.

I watched the robin fly in with a mouth filled with nesting materials. I walked to the window and saw that she was considering building the nest on a downspout of a gutter on the house. Not a good place to put a nest for a number of reasons. To begin with, it was in the open. There was no cover to speak of if robins speak of such things and it was at a steep angle. The robin moved about, getting different looks at the possible building site. It was as if she were measuring the space with her eye. After seeing the site from a number of different angles, she began construction. She carried grasses and mud. She was industrious, but misguided. She had the nest nearly completed, when it fell from the downspout. She didn’t appear disappointed. Undaunted, she immediately began building a new nest using recycled materials from the failed nest wherever possible. She got a bit farther in the construction than she had on the first, but it, too, toppled to the ground. I thought I could detect a slumping in the robin’s posture. She stared at her fallen work for an uncomfortable amount of time before she began building her nest for a third time. It came to a bad end. The robin, operating under the belief that three strikes and you’re out, gave up her task. I hope she found a more suitable site and raised fresh robins.

“How can I keep robins or barn swallows from nesting in inappropriate areas?” You need to make the area unsuitable for nesting. Block the spot in any way that works or you. Placing plastic wrap on surfaces would make it difficult for mud to adhere. You could place small platforms in locations that are more desirable.

“Could I get bluebirds to nest in a box I put up in the city?” Yes, but you are more likely to get house wrens. An eastern bluebird’s diet is 68 percent insects like grasshoppers, crickets, beetles, caterpillars and spiders.

“Do robin eggs hatch all at the same time?” Until they’ve laid a full clutch, robins allow the eggs to stay cool so embryos don’t develop. That way all the eggs hatch at about the same time. The mother robin may start incubating her eggs after the second egg is laid or wait until all the eggs are laid. The female usually does all the incubating for 12 to 14 days. She rarely leaves the nest for more than 5 to 10 minutes at a time. She must turn or rotate the eggs several times daily. Some birds, like hawks and owls that lay eggs in cold weather, start incubating as soon as the first egg is laid. The eggs hatch in intervals, so that the oldest hatchling may be much bigger than the youngest.

“We never question whether something is fair when it’s good. But when something bad happens, the first thing we say is, “This isn’t fair.” — Rabbi Roy Walter

“Happiness is not a station you arrive at, but a manner of traveling.” — Margaret B. Runbeck

Happy Mother’s Day, Mom. I love and miss you.