Funeral services for Joan Marlene Troe, 78, of Emmons, will be at 10:30 a.m. Tuesday at Emmons Lutheran Church. The Rev. Julie Fiske will officiate. Interment will be at Oaklawn Cemetery. Visitation will be from 4 to 7 p.m. Monday at Bayview/Freeborn Funeral Home and one hour prior to the service at the church. To sign the guest book, go to www.bayviewfuneral.com. 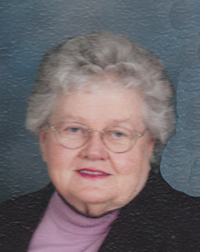 Joan Marlene Troe was born on Nov. 21, 1933, in Albert Lea to Clifford and Agnes (Madson) Olson. Growing up she moved with her family several times, living in Texas, Missouri, Arkansas and Minnesota. Joan graduated from Albert Lea High School in 1951. On June 15, 1963, Joan was united in marriage to Arnold Troe at First Lutheran Church in Albert Lea. The couple made their home in Emmons, and Joan was employed as a legal secretary from 1967 to 2010 for the law office of Peterson, Savelkoul & Benda. She was a member of Emmons Lutheran Church where she was active in the ELCW, the legal secretary’s organization, Emmons Legion Auxiliary and Emmons Civic Improvement Club. Joan enjoyed reading in her spare time, visiting with friends, and treasured time spent with her family.

Survivors include her husband Arnold of Emmons; daughter Deanna and husband Jim Larson of Albert Lea; grandsons: Aaron and wife Amy Larson of Owatonna and their children Hannah, Chloe, Avery, Orlan and Brooke, Seth Larson and fiancé Erica of Albert Lea and his son Isaiah, and Matthew Larson of Albert Lea; brother-in-law Kenneth (Bonnie) Troe; sister-in-law Violet Kvale; and many nieces and nephews.

Joan was preceded in death by her parents; infant sister; in-laws; brothers-in-law and sister-in-law.