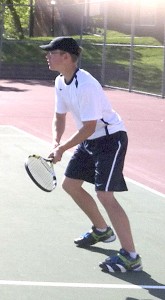 Kyle Zogg plays at No. 2 doubles on Thursday. His partner was Carter Dahl. -- Submitted

“Any time you can travel to Rochester and return home with a tennis victory, it’s big,” Tigers coach Tom Dyrdal said.

“I have to give Cole credit,” Dyrdal said. “He was on the court for almost three hours. It came down to a two-point victory that pulled off the whole match for us.”

“If they weren’t in the lineup, the guys in the lower spots probably didn’t have a chance,” Dyrdal said. “We didn’t win this match without them.”

Dyrdal said he told the team he was excited to be a part of their win and he was pleased with their efforts.

“That’s all you can do,” Dyrdal said. “Play hard and have a positive attitude on the court. When you do that, you have a better chance of winning.”

The Tigers will face Winona today at 4 p.m. at home, pending weather conditions.

Then on Saturday, they travel back to Rochester for a conference meet.