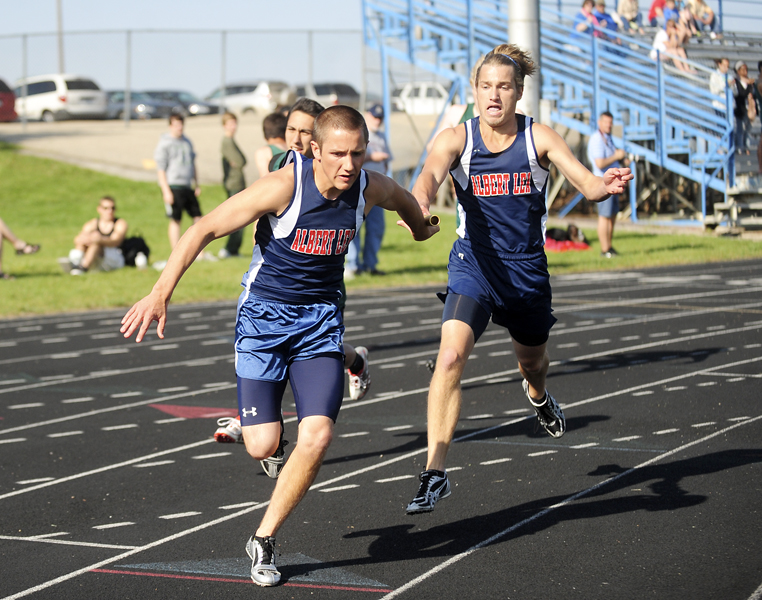 The Albert Lea boys’ track and field took second place on Tuesday with a score of 62 in a home meet against Faribault, 78, and Rochester John Marshall, 46. 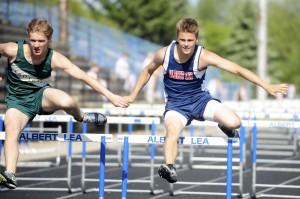 Tigers’ Tyler Wichmann leaps over a hurdle in the 100-meter hurdle race on Tuesday in Albert Lea.

Sean Laurie, one of the Tigers’ captains led the team with three first place finishes.

In the 800-meter run, Laurie finished with a time of 2 minutes and 4.38 seconds. The other two first place finishes were relay races.

In the 4×200-meter relay Laurie, along with Dylan Anderson, Tate Tufte and Kohl Kriewall ran a time of 1 minute and 35.83 seconds. The other relay team Laurie was on included Tufte, Clay Bratten and Isaac Staat. They finished first in the 4×400-meter relay with a time of 3 minutes and 34 seconds.

Tigers coach Kevin Gentz said the relay times weren’t the best they have ever done, but because of Laurie and Staat they usually do well.

“They are really strong athletes, and they’re the reason we’re competitive in the 4×400-meter and the 4×200-meter,” Gentz said. “I’m not saying they’ll go to state, but those two give us a fighting chance.” 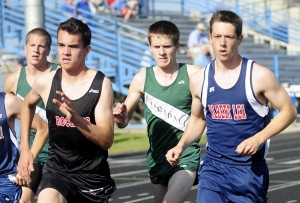 Gentz said the Tigers have until the next conference meet a week from Friday to drop their times.

On the shot put side of things, Bryce DeBoer had another first place finish with a distance of 54 feet and 4.5 inches.

“I don’t think he’s lost at all this year. He’s had some pretty dominating performances,” Gentz said. “His throw was just beyond state qualifying.”

Even though the meet wasn’t a qualifying meet, Gentz said DeBoer was a foot and a half away from the school record and has a chance to make it to state as a thrower.

“He’s the state wrestling champion so it’s pretty big for him to see another state possibility,” Gentz said.

Also leading in the field for the Tigers was Tyler Wichmann. He placed first in the high and long jumps, second in the triple jump and third in hurdles.

Gentz said Wichmann’s most notable performance on Tuesday was his hurdle race in which he placed third with a time of 16.16.

“It was a personal best for him,” Gentz said. “He was running low 18s last year. His legs took a beating, but he did really well and scored a lot of points for the team.”