“Everything is nearly copacetic. I’m going to get a lot of work done today.”

“I find that hard to believe,” I interject.

“Another one of those ‘starts tomorrow’ diets?” I say.

“I’m on an ice cream, doughnuts and pizza diet.”

“Do you think you’ll lose weight by eating ice cream, doughnuts and pizza?” I ask.

“I’d say you have 40-40 chance of success, just as you said you did when you took that math test in junior high,” I add.

“I did say that, but I also said some incredibly profound things like, ‘If you want to catch a bus, you have to think like a bus,’ ‘The most sophisticated listening devices on earth are the neighbors,’ and ‘One day, you are bold, the next day you are old.’ Those are classics. You’ll be eating your words when I become a lean, mean, napping machine by devouring ice cream, doughnuts and pizza. Even now, I can step onto the bathroom scale and watch my weight go down. The needle drops as quickly as the Twins’ pennant hopes.”

“It’s simple. I just clear my mind of all thoughts.” 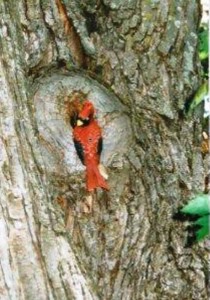 Barb Soper installed this cardinal in aa tree and snapped a photo.

Inside the supermarket, I encountered a group of folks playing bingo. It was a bit of a surprise to see such an activity in a food store, but it was a pleasant surprise. I need to get out more.

After shopping and going through the checkout process, I encountered a ruby-throated hummingbird — in the store. A live bird had discovered the flowers indoors. Two flight paths diverged in a parking lot and it took the one less traveled. It was but one of the hummingbirds that had become regular visitors to Hy-Vee’s floral department.

A cardinal in the hole

I’ve been caring for a couple in their home. Each spends the day in a recliner, looking out a small window. One day, Artyce said, “I keep thinking that someday, I’ll see a bird come out of the hole in that tree.” The hole was where a branch had been cut from a huge maple tree. She’d often say, “I haven’t seen a bird yet.”

I went looking to buy a cardinal, her favorite bird, to put in the hole. I went to Fleet Farm in Albert Lea where Duane said they didn’t have one, but after hearing my story, he said he had one on his birdbath that I could have. I offered to pay, but he wanted to make someone happy. The cardinal needed repainting and my husband Darrell did that. The tree is on the neighbor Craig’s property. Craig said, “Give me that bird and I’ll put it up.”

Artyce was pleased to see the bird coming out of the hole. She was thrilled to hear how many people were involved in getting the cardinal in position. She mentioned it every day. Whenever company came, she’d have me tell the whole story. Her husband Charles couldn’t see the bird from his chair.

‘Over the Back Fence’

It was my good fortune to appear on “Over the Back Fence,” a delightful variety show that takes place regularly at the St. Mane Theatre in Lanesboro and broadcast on KFIL Radio. It’s a delicious slice of small town life.

I paused on my hike to visit with a photographer using a camera the size of a Civil War cannon. He was from Nova Scotia and we shared an appreciation of birds. I pulled my camera from my backpack. It was dwarfed by the size of his device. He looked at my camera, suspecting that I’d gotten it in a box of Cracker Jack that promised, “A prize in every box.” I smiled and said, “Keep at it and one day, you might have a camera just like this baby.”

Harlan Lutteke of Alden asked when pheasant eggs hatch in Minnesota. A rooster crows to claim and defend territory. He will mate with as many hens as possible. Ring-necked pheasant begin incubating eggs sometime in early April through May. The nest contains 10 to 12 eggs and the hen re-nests if the first nest was destroyed. She will renest as late as July, but the number of eggs decreases. Because of this persistence, 40 to 70 percent of hens hatch eggs. The eggs hatch in about 23 days. The mother moves the chicks quickly to a place where they could move about easily and find a good supply of insects to eat. They cover up to 20 acres. At eight weeks of age, they will have expanded their range up to 80 acres. They stay with their mother until they are around 10 weeks of age. The major hatching period is in June.

The 10th Annual Minnesota Martinfest is on June 23 in Royalton. This is a great opportunity to not only learn more about purple martins, but kestrels, bluebirds and tree swallows as well. For more information, go to www.mnmartin.org/.

“The thing about quotes on the Internet is that you cannot confirm their validity.” — Abraham Lincoln

“I never heard a wood thrush until I was a grown man, though I must have been surrounded by them every spring. Each year I discover new sights and sounds to teach me how blind and deaf I must still be.” — Louis J. Halle