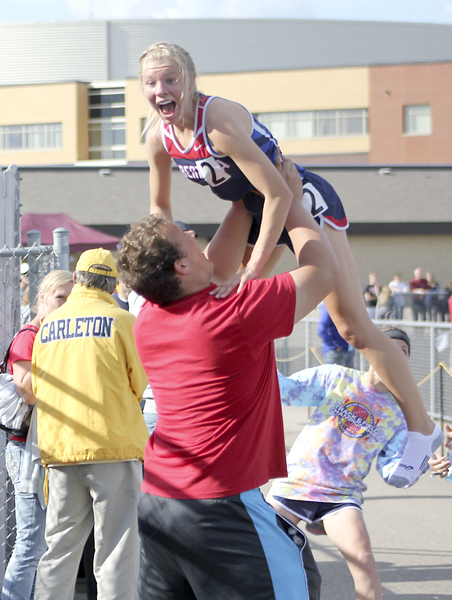 Bryce DeBoer picks up Chrissy Monson at the section meet in Lakeville on Thursday. DeBoer qualified for state in the shot put shortly before Chrissy Monson won her third consecutive 3,200-meter run Section 1AA championship by one second. -- Submitted

The Albert Lea boys’ and girls’ track and field teams competed in a section meet at Lakeville South on Thursday. 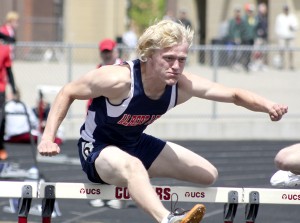 Tigers’ Brody Sundblad qualified for the 110-high hurdle finals with a time of 15.86 seconds on Thursday. Sundblad also is seeded fourth in the 300-intermediate hurdles.

According to coaches Margo Wayne and Kevin Gentz, all of the relay teams will be competing in the finals on Saturday in Lakeville.

Individually, Bryce DeBoer placed second in the shot put and will advance to the state meet after throwing a state qualifying distance of 54 feet and 11.25 inches.

Chrissy Monson will advance to state in the 3,200-meter run after placing first with a time of 10 minutes, 59.54 seconds.

Anna Englin will advance to finals in the 800-meter run after running a time of 2:25.65 during preliminaries.

Brody Sundblad is seeded ninth in the high hurdles and fourth in the intermediate hurdles.

Isaac Staat is seeded first in the 800-meter run and Sean Laurie is seeded fourth.

Wayne said Monson and Rachel Kenis will compete in the 1,600-meter run on Saturday and there will be finals for the pole vault, triple jump and shot put.

Look to Monday’s Tribune for results of Saturday’s meet. 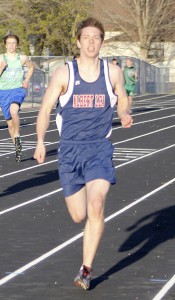