“Everything is nearly copacetic. They don’t pay taxes, they barely speak English and they want our jobs — something must be done about children. I wish the graduation open houses would publish their menus in the newspaper so I’d know which one to go to first. I’d know which places to eat the most. I’ve learned how to make a dessert out of bologna. I just leave it in the refrigerator until it turns blue. I’m on a diet where I eat a yeast cake at lunch, then sit around and swell up for dinner. Speaking of food, have you ever wondered how much gas would be saved if all the drive-thru lanes were eliminated? Or that whoever said that nothing rhymes with orange doesn’t know the correct pronunciation of ’nothing.’ This is a great time of the year. I like to garden, but I can never remember the difference between an annual and a perennial. Then I learn that an annual lives only one season and perennials don’t live that long. That’s got me crooning azure, aquamarine, cerulean, indigo, periwinkle, sapphire and turquoise.”

“For many reasons, but I’ve learned that the best way to forget all of my troubles is to wear tight shoes.” 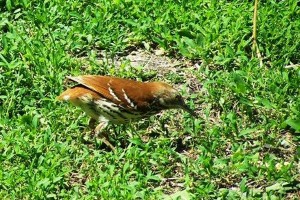 Al Batt took this photo of a brown thrasher missing its tail.

I shredded an orange and placed it on the ground. A brown thrasher began to feed on it almost immediately. The thrasher was missing a tail. Likely the result of a near escape from a predator. The thrasher grabbed a piece of orange and walked it from a sunny location to shade. Maybe the bird was hot or felt more secure near the vegetation that provided the shade.

A bit later, there was a cardinal, a goldfinch and an indigo bunting all feeding on a platform feeder at the same time. To make things even more incredible, a thrasher was perched upon another platform feeder. I could have easily lined up the two feeders in the eye of a camera and have gotten a dandy photo. That would have been true had I had a camera nearby.

I checked a bluebird box housing nesting tree swallows. There was fur in the box. I suspect it had been plucked from an eastern cottontail rabbit that had been killed on the road. Only about 1 percent of bunnies live to be 2 years old. A Buick bugs bunnies. A road isn’t the best habitat for a rabbit. It’s bad rabbitat. Almost everywhere else is good habitat for a rabbit. Under the deck of a house is a great spot for a rabbit. It can hop out from the security of that location whenever it’s hungry and use its incisors like scissors to devour vegetation. This has little to do with anything, but a rabbit’s tail is sometimes referred to as a scut. Tree swallows favor large feathers, particularly white ones, for their nests. I surmised that the fur had been placed there by a black-capped chickadee that had considered the nest. Chipping sparrows and tufted titmice also use hair from animals for their nests. There are no titmice in my yard and the chipping sparrows would not use the nest box. A robin’s nest in a small tree teetered precariously in the strong wind. My wife tied the nest in place. The robins didn’t miss a beat in feeding the three babies. It had been dry. It became wet. We all knew it would happen. It rained hard as I watched the mother robin spread her wings to make sure her nest of babies was adequately covered and kept dry.

I forgot Martha Stewart’s name last week. I can’t recall why I was trying to think of it. No matter. Martha will be OK whether I remember her name or not. At least I remembered Roy G. Biv. Roy G. Biv is a mnemonic for remembering the sequence of colors in a rainbow: red, orange, yellow, green, blue, indigo, violet.

“How far do honeybees travel in search of food?” Typically, up to two miles, but as far as five miles. Some of their favorite plants are basswood, black locust, various clovers, dandelion, goldenrod, milkweed and smartweed.

Cindy Morstad of Hartland asks, “How far do deer roam?” The size of a deer’s home range varies with habitat quality, deer population, sex, time of year and age. Deer living in the best habitats can satisfy their daily requirements in a smaller area. Deer living in less fitting habitats must travel to find food and cover. Deer have the smallest home ranges during summer and the largest in the fall. According to the DNR, the average annual home range size for radio-tagged deer in Missouri is about a square mile. A Minnesota DNR study found that radio-tagged deer traveled an average of five to 10 miles to find suitable winter habitat. Rare cases of deer movement of up to 100 miles have been documented.

Airplanes departing and landing at airports in Sacramento, Kansas City and Denver are most likely to hit birds, according to data from the Federal Aviation Administration.

The red-eyed vireo is a marathon singer. One researcher discovered a red-eyed vireo sang 22,197 times in one 10-hour summer day. It did that just to make sure it got in the last word. My father called it the “preacher bird.” It sounds to me as if the vireo is counting leaves: “28, 29, 30, 31…” Other times it taunts me with a “Here I am. Where are you?” Some folks claim it says, “Here I am. Over here. In the trees. Look up. Vireo. At the top. Where are you?”

“There are two mistakes one can make along the road to truth: not going all the way, and not starting.” — Buddha