Funeral services for Corrine Sandkamp Rovang, 88, of Albert Lea, will be at 10 a.m. Wednesday at Trinity Lutheran Church. The Rev. Curtis Zieske will officiate. Interment will be at Greenwood Cemetery. Visitation will be from 5 to 7 p.m. today at Bayview/Freeborn Funeral Home and one hour prior to the service at the church. Online condolences are welcome at www.bayviewfuneral.com. 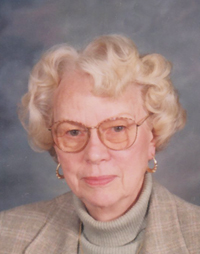 Corrine Sandkamp Rovang was born Jan. 19, 1924, on a farm near Lake Park, Iowa. She was raised on a farm in the Glenville area and graduated from Albert Lea High School in 1940. Her parents were Walter “Joe” and Frieda Bendt Sandkamp. She was baptized and confirmed at the First Lutheran Church in Glenville. Corrine and her sister Cleo, were 4-H members and frequently showed the Grand Champion and Reserve Champion steers at the Freeborn County Fair and also at the Junior Livestock Show in South St. Paul. During Word War II Corrine worked at the American Gas Machine Company in Albert Lea until her mother’s death in 1944. She then quit her job to keep house for her father on the farm. Corrine worked for the Northwestern Bell Telephone Company in Glenville, Albert Lea, Austin and Owatonna during her 35 years as a telephone operator. She was the supervisor who trained new operators.  Corrine was united in marriage with Alfred Rovang on Nov. 18, 1945, in Glenville at First Lutheran Church. Corrine enjoyed bowling, playing bridge and watching the Twins on television. She was a member of Trinity Lutheran Church of Albert Lea and she was a member of Telephone Pioneers.

Survivors include her daughter, Lesley and her husband Jim Finbraaten of Sun Lakes, Ariz., and her son, Jack and his wife Marilyn of Twin Lakes. Corrine is also survived by granddaughters: Erika Finbraaten of Phoenix, Ariz., Angela and her husband, John Ferrin of Gilbert, Ariz., and April Rovang Johnson of Rochester; grandson, Shane Rovang and his wife, Lisa of Rochester; seven great-grandchildren: Stewart, Mitchell, Taylor and Kristi Ferrin, Ava Johnson and Jack and Rae Rovang; sister-in-law, Sylvia Satter; brothers-in-law, Leo Jordahl and Gerald Brown; nieces, nephews and many cousins.