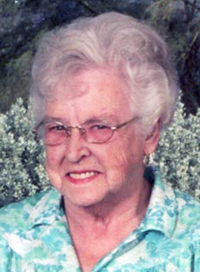 The family would like to suggest that in lieu of flowers, memorial contributions may be made to the Northwood Rescue Unit in her memory.

Mary Jeane Jaspers was born on June 3, 1927, in Gordonsville, the daughter of Ross and Alice (Seuser) Herman. She attended school at District No. 50, Gordonsville, graduating from Northwood High School in 1944.

Mary was united in marriage to Lee C. Jaspers on June 10, 1945, and to this marriage eight children were born, Allen, Susan, Barbara, Jerry, Julie, Kim, Dan and Dennis. Lee preceded her in death on July 22, 1986. After her children were grown, Mary worked as a certified nursing assistant at the Lutheran Retirement Home in Northwood until her husband’s death.

Mary was preceded in death by her parents, Ross and Alice Herman; husband Lee; brothers: Merle and Verle Herman; and a grandson, Jed Gaskill.