“Everything is nearly copacetic. I remember one hot summer, I was at St. Olaf Lake diving for Pearl’s.”

“Yeah, Pearl Olson dropped her purse from the pontoon she was riding in. I had to dive to retrieve it. Pearl was always having a cow. She was a hypochondriac. The hardest part about going to Hypochondriacs Anonymous meetings for her was admitting that she didn’t have a problem. I stopped at the Inndigestion yesterday. I eat because some days, if I didn’t eat, I wouldn’t have anything to do. Besides, I look good in fresh gravy stains. There was something in the soup. I told the waitress that there were foreign objects in my soup. She looked in the bowl and said, ‘Those things aren’t foreign objects. They live around here.’ She shouldn’t have that job. She’s a post rock.”

“You know, when you’re driving down a country road and you come across a fencepost with a rock balanced on top — that’s a post rock. You know it didn’t get up there by itself, it doesn’t belong up there, it doesn’t know what to do while it’s up there, and you just wonder what kind of fool put it in that position. That waitress is a post rock.” 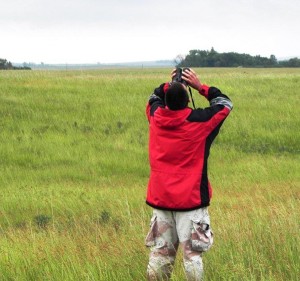 It was my good fortune to speak at the 10th anniversary of the Potholes and Prairies Birding Festival headquartered in Carrington, N.D.

I listened to chestnut-collared longspurs singing truncated versions of western meadowlark songs and sparrows singing songs meant to cut through the wind. Voices of the invisible from the prairies. I left windows open to hear them.

John James Audubon saw a Sprague’s pipit in 1843 and called it the Missouri skylark. Audubon wrote, “On several occasions my friend Edward Harris sought for these birds on the ground, deceived by the sound of their music, appearing as if issuing from the prairies which they constantly inhabit; and after having traveled to many distant places on the prairie, we at last looked upwards, and there saw several of these beautiful creatures singing in a continuous manner, and soaring at such an elevation, as to render them more or less difficult to discover with the eye, and at times some of them actually disappearing from our sight, in the clear thin air of that country.”

This bird flies high in the sky for up to an hour at a time. I looked straight up at a skylarking (singing on wing) pipit until my neck became sore — a case of pipit neck. I wished I were wearing a T-shirt reading, “I have pipit neck.” As I did so, I repeated the ditty, “Birdie, birdie, in the sky, dropped some whitewash in my eye. I don’t worry, I don’t cry. I’m just glad that cows don’t fly.”

As the pipit skylarked, Linda Ronstadt could have been singing, “Oh skylark. I don’t know if you can find these things, but my heart is riding on your wings. So if you see them anywhere, won’t you lead me there?”

Shakespeare didn’t write about the Missouri skylark, but Juliet said to Romeo, “Wilt thou be gone? It is not yet near day. It was the nightingale, and not the lark, that pierced the fearful hollow of thine ear. Nightly she sings on yon pomegranate tree. Believe me, love, it was the nightingale.”

Nightingales sing at night. Larks sing during the day. Juliet didn’t want Romeo to leave, so she told him that he’d heard a nightingale and not a lark. If a nightingale sang, it was night and he could stay. If the lark sang, Romeo had to depart.

No one was in a hurry to make tracks as the Sprague’s pipit sang.

Sue Tripp of Albert Lea writes of cicada killer wasps. Her neighbor has used the Orkin man, ammonia water poured into their holes at night as recommended on the Internet, and a quality-rated wasp spray. Nothing worked. She asked for suggestions to get rid of the wasps. People are concerned when they see 2-inch long wasps buzzing around. Cicada killer wasps dig holes as deep as 6 inches in lawns, gardens, flowerbeds, golf course sand traps and sandy volleyball courts. They prefer sandy or bare areas and kick out a 6- to 8-inch diameter horseshoe-shaped mound of dirt around the nest entrance. Males don’t sting, Females can sting, but are difficult to provoke. They appear in July and August. The cicada killer has a black body marked with yellow across the thorax and abdomen. Cicada killers are solitary wasps unlike hornets, yellow jackets and paper wasps that are social wasps. Cicada killer females sting to paralyze prey (cicadas) rather than to defend nests. Adults feed on flower nectar and sap exudates. The female wasp places the victim into a burrow and lays an egg in the body of the still living cicada. The paralyzed cicada is food to rear the young. The larva spends the winter in the tunnel and becomes an adult next summer. The most natural method to get rid of cicada killer wasps would be to hit them with a tennis or badminton racket. There are always fewer wasps than there appears to be. You could knock them to the ground with water sprayed from a garden hose or a blast of air from a leaf blower and then stomp on them. Cicada killers inhabit disturbed environments. They require bare soil or short grass to nest. They prefer dry areas, so you could keep the ground wet. Use a thick layer of wood chip mulch in flowerbeds. Covering a nest site with six inches of crushed rock should discourage nesting. I don’t think I’ve talked to anyone who has been stung by one of these wasps. Uffda! That was a long answer. Good luck.

“There isn’t a single human being who hasn’t plenty to cry over, and the trick is to make the laughs outweigh the tears.” — Dorothy Dix.

“One of the secrets of a long and fruitful life is to forgive everybody, everything, every night before you go to bed.” — Bernard M. Baruch.