Mosquito bites could be considered a tax

“Everything is nearly copacetic. If ignorance is bliss, then I must be the happiest thingamajig in the whatchamacallit. When I die, I want it to be on my 100th birthday at my palatial estate on the beach in Hawaii, and I want my wife to be so upset that she’ll have to drop out of college. It’s so hot, it’s not difficult to live in anyone’s shadow. I’ve become a member of the sweater set — I either sweat or set. I could heat my house all winter with the trapped car heat collected in my junker in just one day. But I can get through anything as long as there is enough ketchup. I sprayed a little Lemon Pledge on my vanilla ice cream to give it a refreshing lemon flavor. I’ve been attending the church with the best air conditioner lately. The preacher gives the same sermon every Sunday. He just yells in different places. There are always people from out of the area sharing a pew with me. Lots of folks come here just to enjoy our mosquito season.”

“Where are the people from?” I say.

“I never ask where anyone is from. If they’re from Minnesota, they’ll tell me. And if they’re not, I don’t want to embarrass them.” 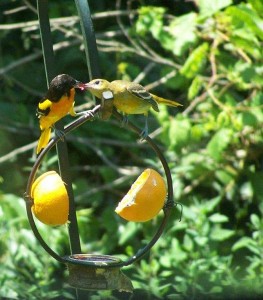 Photo of a father Baltimore oriole feeding grape jelly to a fledgling by Al Batt.

The corn is knee-high by the Fourth of June and tasseling by the Fourth of July. I sniffed the air. The skunk may be the county flower. I was picking black cap raspberries. The berries are toothsome delights on thorny canes. I love them fresh, on breakfast cereal or when covered with milk and sugar. The mosquitoes welcomed me with open wings and fed on me just as I fed on the raspberries. I think of the mosquito bites as just another tax I pay to live in the great place that I do.

Either you or the woodpecker are paying for the damage

Alexander Wilson immigrated to America from Scotland in 1794. A wildlife artist and naturalist, Wilson published the first volume of his American Ornithology in 1808 — the first comprehensive account of North American birdlife. Like many illustrators of the day, Wilson painted things he had shot and killed. Wilson wrote of shooting and wounding an ivory-billed woodpecker. He decided to keep the bird alive so he could study it at his leisure. Wilson released the woodpecker in his room while he took care of his horse. When he returned to the room, less than an hour later, the bird had nearly destroyed one wall and part of the ceiling in its effort to escape. Before leaving the room again, Wilson decided to tether the bird to the leg of a table. Upon his return, he discovered that the bird had ruined the table. Wilson described the woodpecker as having a noble and unconquerable spirit.

“How can I tell a mallard from an American black duck in flight?” Both species have a colorful iridescent patch on the top of the secondary flight feathers called a speculum. The mallard’s speculum is blue, with a thin line of white along both the top and bottom edges. The black duck’s speculum has no white and ranges from a deep, dusky blue to purplish.

“Do you think the ivory-billed woodpecker is extinct?” I hope not, but research is not optimistic. In the February 2012 issue of the journal Conservation Biology, a group from the University of Vermont concluded that the chance that the species exists today is 0.0064 percent. They determined that if the population in the 1930s had been 100 birds, the species would have survived no longer than 1980. Ivory-bill expert James Tanner, in his 1942 report “The Ivory-Billed Woodpecker,” estimated that the 1930s population was 22 birds.

Gail Savick of Freeborn writes, “I want to know if there is some meaning behind the blackbirds dropping their babies’ poop in the bird waterer after taking it out of the nest?” The toilet habits of the grackle irritate many folks. Baby grackles produce fecal material that looks like miniature sandwich bags filled with poop. The parents grab these little bird diapers and fly away with them. They want to dump them away from the nest so that predators would not be aware of the location of the baby birds. The grackle considers water the perfect place to dump its cargo, as the water would wash away all evidence. A swimming pool or birdbath is ideal, but a car with a nice polish does in the pinch.

Joanne Olson of Emmons wonders how old cottontails are when they become independent. Eastern cottontail rabbits leave the nest when they are just 3 weeks old. A small rabbit with its eyes open, able to hold its ears erect and approximately five inches long is self-sufficient. One reason that so many rabbits are presumed orphaned is that the mother normally avoids the nest in daytime, feeding the young between dusk and dawn.

Dolbear’s equation stated that if you count the number of field cricket chirps in 15 seconds and add 40, you would have the temperature in Fahrenheit.

Osprey prefer to fish in shallow water. The fish they catch are typically 6 to 13 inches long and weigh up to 2/3 of a pound. An osprey fishes 12 minutes on average before catching a fish.

A nursing female bat could eat its weight or more in insects each night. That would be like a 200-pound man eating 800 quarter-pounders each day.

According to the Centers for Disease Control and Prevention, raccoons continue to be the most frequently reported rabid wildlife species at 36.5 percent of all animal cases during 2010, followed by skunks at 23.5 percent, bats at 23.2 percent and foxes at 7 percent.

Don’t exclude bats from your home from June 1 through Aug. 15. That is when they have pups.

To relieve the sting of stinging nettles, rub the juice from a burdock leaf on it.

“Success is a little like wrestling a gorilla. You don’t quit when you are tired — you quit when the gorilla is tired.” — Robert Strauss