Most bats travel less than 3 miles for food

“Everything is nearly copacetic. I spent the day with the Tollefson twins. One can’t hear and the other talks all the time. They’re retired now, but when they were boys, they wanted to be cowboys. They ended up being sowpunchers on a pig ranch. Their mama was the one that had the toilet paper roll holder that played, ‘I Did It My Way.’ Their old man was an admiral in the Army.”

“No, he was in the Army. He had no sense of direction and got lost a lot. He was stationed in England. He had dental work done there and had trouble with his teeth all his life. His London bridge kept falling down. The Admiral became an undertaker. That’s why he named his twin boys Doug and Barry. The twins and I watched a baseball game on TV together. They get every channel there is. The twins love to turn the air conditioning up so high that they need blankets and then watch a ballgame. I told them what a great base runner I had been. In all my years of playing, I was never once tagged out while I ran the bases.”

“That’s because you carried the bat with you,” I add.

The man told me that the squirrels had taken over his bird feeder. Squirrels won’t work for just peanuts. He looked for a simple solution as we all do. A stranger told him to put an onion on the feeder because squirrels don’t like onions because they make squirrels cry. We tend to take the advice of strangers too readily. 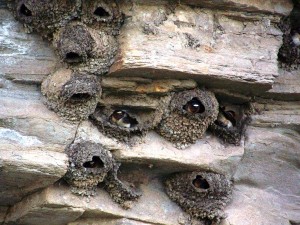 The man placed a slice of onion on the feeder. Inside his home, he took up sentry by the window. The first squirrel to visit the feeder sniffed the onion.

Then the squirrel carried the slice away.

Deer are the most important reproductive hosts for blacklegged (deer) ticks. A study in Rhode Island found that each deer could produce about 450,000 larval deer ticks a year. That number seems incredible, but if valid, it’s no wonder tick populations thrive.

Karen Wright of Mankato asks how far a bat travels from its roost to find food. I suspect most of the traveling is less than 3 miles, but some bats have been discovered foraging six miles from their roosts.

Jean Schlegel of Rochester asks why birds sing so early in the morning. I thrill to the dawn chorus of birdsong. Many birds sing before sunrise, which is too early for some people to appreciate the wonder of the songs. Some scientists believe that early morning is the best time for males to attract females or to proclaim territory. The light is too dim to permit birds to forage efficiently, so singing makes good use of a bird’s time. Weather conditions are often calm in the early day, allowing songs to travel a good distance. Claude Monet said, “I would like to paint the way a bird sings.”

Gene Pederson of Hartland asked what kind of plant devil’s pitchforks is.

It’s an annual herb called nodding beggar’s-ticks that has many names — devil’s beggarticks, common beggarticks, common tickseed, devil’s bootjack, stick-tight, bur marigold and pitchfork weed. It grows up to two-feet tall with yellow flowers that are produced in early autumn. The flat brown seeds, that look similar to a tick, have hooked barbs that attach to clothing (especially socks) or to animal fur.

Dad called them “bridge swallows” because the birds often nest under bridges. The master masons construct nests that are gourd-like structures built of mud with a tubular entrance hole. Cliff swallows are colonial nesters.

In medieval times, swallows were believed to hibernate in mud. The legend is that the cliff swallows return to the Mission San Juan de Capistrano in California on March 19 (St. Joseph’s Day) each year. They return before that date, but the residents consider them sparrows until March 19. The swallows haven’t been seen much at the mission for years. Cliff swallows don’t always migrate to the same exact location. The birds’ nests were removed during preservation work at the mission, and the swallows may have taken that as a sign that they weren’t wanted. People blame the lack of swallows on urban sprawl or changing weather patterns. Another legend says that swallows, in preparation to migrate from Jerusalem, take along small twigs. When they tire over the ocean, they drop the twigs on the waves and sleep on top of them. In reality, the swallows migrate from Argentina.

Firefly larvae live on the ground, under bark and in moist places. They eat earthworms, snails and slugs,

Wimbledon utilizes a falconer to keep pigeons away from the tennis court during matches. It’s a Harris’s hawk named Rufus.

In “Through the Looking Glass,” Alice speaks to a number of flowers in Wonderland — tiger lily, rose, daisies, violet and larkspur.

A mountain lion killed on a Connecticut highway had apparently walked halfway across the country — a 1,500-mile journey from South Dakota.

According to the National Oceanic and Atmospheric Administration National Climatic Data Center, Phoenix has 107 days a year where the temperature reaches 100 degrees and has an average temperature of 75 degrees. Miami averages 77 degrees.

I do a Breeding Bird Survey covering parts of Mower, Freeborn and Steele counties. I’ve been doing the survey for many years. It involves 50 stops for three minutes at the same locations each June. I count the birds I see or hear during each stop. I counted 51 species this year, down from 53 last year. I counted more red-winged blackbirds than any other species followed by the common grackle and European starling. The American robin was present at more stops than any other species. I heard pheasants crowing at 14 stops compared to 12 stops last year.

“Nobody can go back and start a new beginning, but anyone can start today and make a new ending.” — Maria Robinson

Preserve nature where you live, not just where you visit.