Ants eating peonies do not harm the plant

“Everything is nearly copacetic, although there are days when I feel like a 1970 Gremlin stalled on the side of the road. Compared to my cousin Cash, I’m a pauper. He bought stocks and bonds back when they were new. He took me for a ride in his snazzy new car. He talked to it. He’d say, ‘Wipers on,’ and the wipers came on. Then he’d say, ‘Radio on,’ and the radio began to play. I thought maybe that would work on my old beater, too. I got in it this morning and said, ‘Check engine light off.’ I think my car must have selective hearing because it didn’t work. I have to keep that light covered with duct tape. I have a gazillion ants in my house. It’s a convention. I suppose my sweet disposition attracts them. Weasel thinks I’m being paranoid. He didn’t actually say that, but I could tell he was thinking it. I’ve figured out a way to deal with them. I borrowed a leaf-blower from Weasel and used it to blast the ants out the door.”

“How did you come up with that solution?” I say.

“I was listening to an old Bob Dylan song. I heard Bob crooning, ‘The ants’re blowin’ in the wind.’” 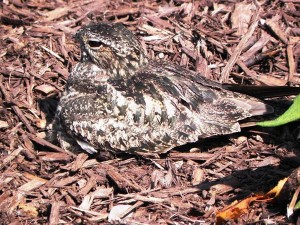 Al Batt took this photo of an incubating common nighthawk.

I watched a male indigo bunting fly into the feeder attached to my office window. Although science tells us that there is no blue pigment in its feathers, the tiny bird appears too blue to be real.

A reader called about a raccoon that had become a problem. He couldn’t identify the raccoon because it was wearing a mask.

I recited a poem for the caller. “I had a little raccoon. I kept him for a pet. He joined the French Foreign Legion. Because he wanted to forget.”

It was of no help.

Vi Kycek of Albert Lea asks, “Why is it that the male birds are the best looking?” Males are more colorful or ornamented than females in most bird species. There is a female preference for bright colors in males. Females of species exposed to predators while incubating tend to have dull colors. Studies have shown that females use the brightness of a male’s color as an important indicator of his health and vitality.

“Why are ants always on my peonies?” It’s because they are hungry. The flower buds secrete a sweet substance that the ants like to eat. The ants are not harmful to the peonies. Contrary to popular belief, ants aren’t required for the buds to open.

“How can I tell the difference between dragonflies and damselflies?” Damselflies usually fold their wings over their backs when they land. Dragonflies hold their wings out to the sides like an airplane while at rest. Dragonfly wings are opened and damselfly wings are closed. Dragonflies have round heads with eyes close together. Damselflies have elongated heads with eyes far apart. These are generalizations, but helpful guides.

“What has the worst sting of any insect?” The tarantula hawk, a wasp that preys on tarantulas, is believed to have the most painful sting in the U.S. The bullet ant of Central and South America might be worse.

“Do dragonflies eat mosquitoes?” Some people call them “mosquito hawks” and they would eat mosquitoes if they were flying at the same time. Most dragonflies are daytime fliers. Dragonfly nymphs are great predators of mosquito larvae.

Delbert and Judy Karsjens of Clarks Grove write, “We have some finches at our feeder that have some problem with their eyes. There was one on the ground, Delbert picked it up and it flew away.” Conjunctivitis is often seen in house finches. Infected birds have red, swollen, runny or crusty eyes. In extreme cases, the eyes are swollen shut or crusted over, leaving the birds unable to see. Birds in this condition have trouble feeding. You might see them remaining on the ground, searching for seeds. If the infected bird dies, it’s usually not from the conjunctivitis itself, but rather from starvation, exposure or predation. It’s caused by a bacterium. The infection poses no known health threat to humans.

Tim Rollenhagen of Wells asks how many broods house wrens have each year. The female incubates the eggs for 12 to 13 days and the young typically fledge in 16 to 18 days. They usually have two, rarely three, broods per season. Sometimes one male will serve two females. Both sexes sing. When house wrens fail to raise a brood of their own, occasionally they will satisfy the urge for caring for offspring by feeding the young of other species.

Ethnobotany is the study of the plant lore and agricultural customs of a people.

Ruth Searle of Waseca wishes that birds wore nametags so that they might be easier to identify.

Dragonflies can fly up to 35 mph, but are so quick that a researcher told me that one could fly into his net and out before he could catch it. A dragonfly is able to detect a stationary human 30 feet away and a moving person 60 feet away.

Opossums lingering on the road discover that life is more of a fracas than a fairy tale.

A NASA engineer’s study showed that 6 percent of drivers go out of their way to hit animals on the road. The other drivers were too busy texting to see any animals.

“Think of life as a gigantic ice cream parlor with infinite flavors to taste. Tell yourself the goal of life is to taste as many flavors of experiences as you can. Admittedly, you won’t like every flavor. But hey, you don’t need to go near that flavor ever again. Instead, indulge in flavors you know you’re passionate about! And don’t be afraid to taste something that might look funny — you never know!” — Karen Salmansohn

“Do the great while it is still small.” — Tao Te Ching