Bats are predators of night-flying insects

“Everything is nearly copacetic. I can’t complain, but I try. I don’t like the heat, but I’ll get used to it. I didn’t like my beard at first, but it grew on me. I can describe our weather in two words, ‘You never know.’ I’ve been going to Groaner’s Gym. I sit on a mat and roll side-to-side. It’s supposed to help me lose a few pounds. And it works — because as we all know, a rolling stern gathers no mass. Exercising gives me time to consider things. What do you think is my purpose in life?”

“To wonder what your purpose in life is,” I answer.

“Life is confusing. I remember playing football against the Waseca Area School of Massage. We lost, but we felt good about it. My neighbor Still Bill, if he ever worked up a sweat we’d never have to wish for rain, had his dog go missing and he is frantic. I told Still Bill, who if lollygagging were dirt he’d cover about an acre, ‘Why don’t you put an ad in the paper?’ He did, but two weeks later, the dog is still missing. I asked him what he put in the paper. Still Bill, he’s as tight as he is lazy, replied, ‘Here boy!’” 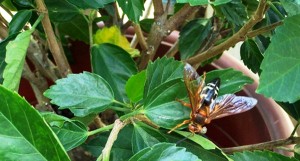 Jim Olson, of Albert Lea, took this photo of a cicada killer wasp in a hibiscus. -- Submitted

Cheryl Overland of Albert Lea asks if a catbird makes sounds other than meowing like a cat. The gray catbird’s song is an exuberant series of whistles and catlike meows interspersed with sounds that it has borrowed from the songs of other birds. Some describe it as squeaky, uneven and not musical, but I enjoy its song.

Vic Nelson of Albert Lea asks what wrens and bats feed on when there are no mosquitoes. House wrens eat a wide variety of insects and spiders. They feed primarily upon beetles, caterpillars, daddy longlegs, earwigs, flies, leafhoppers, snails and springtails. Bats are predators of night-flying insects, many of which are pests. Pregnant or nursing mothers will consume their body weight in insects each night. According to Bat Conservation International, one bat can devour more than 4,000 insects per night — ants, beetles, gnats, mayflies, moths, mosquitoes and wasps. A good bat population means that fewer pesticides enter the ecosystem.

“When I was a child, there was insect called a ‘meat bee’ that would sting. What was it?” It was a nickname for a common wasp, the yellow jacket.

A caller said he’s having problems with chipmunks or squirrels taking two or three bites out of his ripe tomatoes. He’s wondering why they eat the ripe ones instead of the green ones. The critters are just like us. They love ripe tomatoes. They taste better. You could try making them fried green tomatoes or green tomato pie.

Rick Mammel of Albert Lea asks how small birds like goldfinches and chickadees are able to eat large sunflower seeds. Goldfinches are quite capable of handling sunflower seeds that are too large for some other species of a similar size. A goldfinch holds the seeds with the long axis parallel to the beak, which has cutting edges that crack the hull. A chickadee uses its feet or a crevice to hold the seed like a vise while it hammers it open. Black-oil sunflower seed is the most popular of the bird feeder fare. The outer shell of a black-oil sunflower seed is thinner and easier to crack than that of the gray-striped sunflower seed and the kernel from a black-oil seed is larger than one from a gray-striped.

“When do turtle eggs hatch?” Incubation time varies with site exposure and temperature. Eggs laid in June typically hatch in August or September. If eggs are laid late or the summer is cool, the eggs might not hatch until the next year.

Janice Van Wilgen of Hollandale sent me a photo of a baldheaded cardinal and wondered what was going on. I see cardinals and blue jays in this condition each summer. Having a bad feather day makes the birds look like tiny vultures or like reptiles. As a boy, I was told that such a condition was caused by mites — possibly disease or diet. Nobody ever mentioned stress. I believe there is another reason for the odd look. No, it is not due to an emulation of Michael Jordan or Bruce Willis. An abnormal molt occurs on some birds that causes them to lose their head feathers simultaneously. Most examinations of the birds that find themselves in this circumstance show no mites or disease, but there will be more research. The feathers grow back so there is no need to start a Hair Club for Cardinals. I can’t address what impact baldness might have on a bird’s self-esteem.

“How many bald eagles live to be a year old and how many live to adulthood?” According to the American Bald Eagle Foundation, about 50 percent live a year and approximately 10 percent make it to sexual maturity.

There is a simple and inexpensive way to preserve wildlife habitat. If you buy a Duck Stamp for $15 (available at most post offices), 98 percent (or $14.70) of that amount is used to secure habitat. The stamp also acts as an entrance pass to National Wildlife Refuges.

Zookeepers searching for 30 squirrels that escaped from a Japanese zoo during a typhoon were extremely successful in tracking down the animals. They recovered 38 squirrels.

The Cherokee believed that fireflies were stars descended from the heavens to help them find a lost child.

“I urge you to please notice when you are happy, and explain or murmur or think at some point, ‘If this isn’t nice, I don’t know what is.’” — Kurt Vonnegut

“Life is too short to wake up with regrets. So love the people who treat you right. Forget about those who don’t. Believe everything happens for a reason. If you get a chance, take it. If it changes your life, let it. Nobody said life would be easy, they just promised it would most likely be worth it.” — Harvey MacKay