“Everything is nearly copacetic. I just dropped Pop off at the Fishmore & Doolittle Retirement Center. He’s taking a class called, ‘Thinking out of the box.’ It’s about cremation. He had to get there early to sit up front so he could hear. He smoked cornsilk when he was a boy and it stunted his ears. Pop’s a plunger. He spends most of his time in the hardware store or in the bathroom. While he’s out, I’ll set the clocks in his house. Right now, each room is in a different time zone. Hank Uft pulled me over for attempted speeding. That brightened my day like a total eclipse of the sun. He asked for my driver’s license and registration. He let me go with a warning. I drove away and I’m not far down the road when I realized that Hank hadn’t given me my driver’s license and registration back. That didn’t surprise me. I think his gene pool is an aboveground one. So I chased him down. I blinked my headlights at him and finally got him pulled over. I got out of my car and walked to the squad car. Hank Uft rolled his window down and I said, ‘I’ll need to see my driver’s license and registration.’” 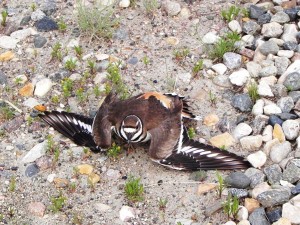 Friends, Romans, wearers of fuchsia, lend me your ears

Nancy Rosenberg of Albert Lea told me that she was wearing a fuchsia-colored T-shirt while visiting in Vermont when a hummingbird buzzed around her head and attempted to drink from her ear. Hummingbirds are attracted to red or orange flowers, probably because many flowers of those colors hold heavy nectar loads. Hummingbirds have good color vision that allows them to see into the ultraviolet spectrum. If you wear red in a garden, be prepared to lend an ear to a hummingbird.

Have you ever seen a killdeer egg? Most people have not. They are marked cryptically. A killdeer’s nest typically looks more like no nest at all than a nest. The nest is a simple depression scraped in bare ground and lined with pebbles, twigs or nothing at all. Because killdeers lay their eggs in open ground, their nests are highly vulnerable to predators. To prevent this, a parent bird performs a broken wing act to lead predators away. In June, I stumbled upon a nest alongside a driveway near a pile of gravel. The killdeer pair put on quite an act, mimicking injuries so well that it led me to get into my car and drive away. 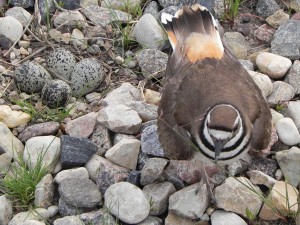 Photo of a killdeer nest by Al Batt.

I worked with an aquarium that included a bowfin. Many fairgoers asked about it. It’s a medium-sized (Minnesota record is 10 pounds, 15 ounces) and can be found in lakes and streams in much of Minnesota. Bowfin survive in murky, oxygen-depleted water by rising to the surface and gulping air into their air bladders. They can survive out of water for a considerable time. It’s also known as a dogfish. Its dorsal fin stretches most of the length of its back. Bowfin eat fish, crayfish, insects, amphibians and crustaceans. Dogfish don’t bark and catfish don’t meow. Dogfish do make sort of a croaking sound out of the water when they gulp air. I’ve heard that the name “dogfish” refers to its well-developed set of canine teeth.

A legend from the Philippines says that fireflies are the descendants of a vain man who offended a fairy. The fairy turned him into an insect and told him that he would remain one until he found another creature more beautiful. He searches each night, carrying a torch to illuminate his way.

Karen Wright of Mankato asks if bats eat fireflies. Bats eat insects on the wing. Fireflies are beetles with flashing lights. Fireflies contain substances called lucibufagins that taste bad to most creatures. Fireflies are most active at night so it’s logical to presume that bats would eat large quantities of fireflies, but according to a study of the feeding behavior of little brown bats conducted by Fitchburg State University, this is not the case. The flying mammals ate surprisingly few fireflies given their overlapping periods of nocturnal activity. The little brown bats fed primarily on soft bodied aquatic insects (40 percent of the total dietary volume) while avoiding fireflies.

“There is something that looks like poop-on-a-stick in my cherry tree. What is it?” Black knot is a disease of Prunus species like plum and cherry trees. The most obvious signs of the disease are the hard, black, swollen galls, called knots, on branches and twigs. Prune by cutting back beyond the black knot by at least six inches to be sure you’re not cutting infected tissue.

There are only two lark species (horned lark and skylark) found in North America. The horned lark lives in prairies and fields. It’s brown above and white below with a black neck patch and mask. Tufts of head feathers resemble horns. The skylark is found on Vancouver Island. It’s an introduced species imported from Great Britain and released in 1903 by the British Columbia Natural History Society. Meadowlarks are members of the blackbird or icterid family.

A Canadian man accidentally shot himself in the forehead while trying to kill a mouse with the butt of his rifle.

If a 170-pound man were a hummingbird, he’d need to burn about 155,000 calories and his body temperature would reach 750 degrees Fahrenheit.

A boy recovered after being hit in the face by a bird while riding a roller coaster at an amusement park in New Jersey.

“You may not control all the events that happen to you, but you can decide not to be reduced by them.” — Maya Angelou

“You can’t have everything. Where would you put it?” — Steven Wright