Many house wrens migrate to Mexico for winter

“Everything is nearly copacetic. I’m tired. I’ve been walking since I was 8 months old. I went to a wedding last week. Andrew Olson-Nelson married Jennifer Thompson-Sorenson. So now, they are Andrew and Jennifer Olson-Nelson-Thompson-Sorenson. What matters is that they had good mashed potatoes and gravy at the wedding supper. Jennifer’s mother asked me if I could eat mashed potatoes and gravy without getting gravy all over my shirt. I didn’t know. I’ve never tried. I’m a lucky fellow. The garbage disposal at the wedding hall ate better than most people. Ma was late getting to the wedding because she was doing the ironing. Ma likes to have a beer while she does the ironing. I’m beginning to worry about her. She’s started to take in ironing from the neighbors. I stopped at Garage Mahal because my speedometer has been broken for years. I listened to Gene Chandler’s ‘Duke of Earl’ on the 8-track. Each time he sang ‘Duke,’ as I passed a white line in the middle of the road, I knew I was doing 55 mph. They messed up the repair as always. I asked the owner, Jimpossible, why I never got what I needed?”

“He said it was because he’s too polite.”

A window onto wildlife

I sat in an auto repair place. I was preparing myself to tremble pitifully as they tabulated my bill. I looked out an enormous window and watched a squirrel scamper. That’s what squirrels do. American white pelicans flew over in squadrons in tight formation over the street. I imagined their shadows falling upon passing cars. Turkey vultures circled over the repair shop as if they might find a dead car to be a delectable dish. I spotted several warblers flitting about in landscaped vegetation. I have been on a whale-watching trip. It was a righteous endeavor. It was no more exciting than the wildlife-watching trip I took without leaving a chair in the waiting room of an auto repair

Most house wrens migrate to the southern United States and Mexico for the winter. The house wren’s scientific name is Troglodytes aedon. A troglodyte means “one who lives in caves.” How can a tiny brown bird be a caveman? This wren builds nests in natural cavities, such as woodpecker holes and in artificial ones that include nest boxes, mailboxes, cans and jars. A friend made a wren house out of an old cowboy

boot. A wren took to it like a duck to water. 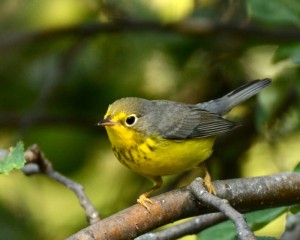 Photo of a Canadian warbler by Darcy Sime of Alden.

Aedon, in Greek mythology, was a daughter of Pandareus. According to Homer, she was the wife of Zethus, who with his brother Amphion was the joint king of Thebes. She had only two children and envied her sister-in-law, Niobe, who had many. She planned to murder Niobe’s eldest son in his sleep, but by mistake killed her own son, Itylus, who was asleep in the same room. Zeus took pity on Aedon in her grief and changed her into a nightingale; her song was a lament for her dead son. A wren isn’t a nightingale, but is a skilled songster.

I was doing a marsh survey at Myre-Big Island State Park. It should have been darker than dark, but most of a moon provided light. I was waist deep into the task and mosquitoes when a blue-winged teal flew straight at me. I had to fall to the earth to keep from being hit in the head. It would have knocked me right out of my Red Wing boots. I don’t think the duck did that on purpose, but I don’t know for sure. The blue-winged teal is a small duck, but it could have done me harm. I would have come to hearing a voice saying, “How many fingers am I holding up? Do you know what day this is?”

I wouldn’t have gotten either of those questions right even if I hadn’t been hit in the noggin by a blue-winged teal.

“Don’t say you don’t have enough time. You have exactly the same number of hours per day that were given to Helen Keller, Pasteur, Michelangelo, Mother Teresa, Leonardo da Vinci, Thomas Jefferson and Albert Einstein.” — H. Jackson Brown Jr.

“A man has made at least a start on discovering the meaning of human life when he plants shade trees under which he knows full well he will never sit.” — D. Elton Trueblood