A gaggle of geese is always worth a gander

“Things are nearly copacetic. Still Bill and I have been combining corn. It’s hard to pull Still Bill away from his TV. He has furniture-based leisure priorities.”

“He’s a couch potato. He’s not very ambitious. If he were a hyena, he’d only smirk. He buys used shoes. He lets someone else break them in. I went to the state fair and ate deep-fried butter on-a-stick. That stick provides a lot fiber. I remember the time Ma and Pop took the entire family to the fair. We wanted to go to the zoo, but Pop said that if the zoo wanted us, they could come and get us. We went to see the Wild Man of Borneo at the fair. He was in this big tent, and they were charging to see him. It was a big deal. Pop was digging deep in order to come up with enough money to get us all into that tent. The fellow taking the money took a good look at our family herd and waved us into the tent while telling Pop, ‘Keep your money, mister. It’s worth much more for the Wild Man of Borneo to see your family than it is for your family to see him.’” 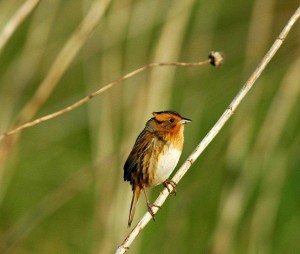 Photo of a Nelson’s sparrow near Woodworth, N.D., by Rick Bohn

Two trees rubbed large limbs together in the wind. That action produced a sound that was a cross between the howl of a banshee and the snarl of a mountain lion. The trees were not the kind of things that go bump in the night, but they could be called such things. My attention was drawn skyward by another sound. Too early for fall, but an autumn sound reaches my ears. Traveling geese. When the season turns and the days shorten, geese ride helpful winds southward. Perhaps this was a practice run. A gaggle of geese in the shape of a V was audible, but nearly invisible until coming close enough to make a dark presence against the sky. I was happy to see them. A goose is always worth another gander.

“What does it mean when a lake turns over?” Water density varies with water temperature. Water is heaviest at 39 degrees Fahrenheit and as temperature varies from 39 degrees, it becomes lighter. In summer and winter, lakes are maintained in a stratified condition. Less dense water is at the surface and more dense water is near the bottom. During the late summer and autumn, air temperatures cool the surface water causing its density to increase. The heavier water sinks, forcing the lighter water to the surface. This continues until the water temperature at all depths reaches approximately 39 degrees. Because there is little difference in density at this stage, the waters are easily mixed by the wind. The sinking action and mixing of the water by the wind results in the exchange of surface and bottom waters that is called “turnover.” In the spring, the process reverses itself. Ice melts and surface waters warm and sink until the water temperature at all depths reaches approximately 39 degrees. The sinking combined with wind mixing causes spring “turnover.”

“What causes fairy rings on my lawn?” Circles or arcs of dark green, lush, fast growing grass is perhaps the most common fairy ring, especially in spring. These rings are commonly 2 to 15 feet in diameter. Mushrooms or puffballs may appear under wet conditions in this same ring pattern. A ring of brown or dead grass may appear. Fairy ring fungi are not attacking the grass directly but are breaking down organic matter in the soil. As a result, nitrogen is released that the grass may use, causing the green ring. In cases where the mycelia of the fungus become dense enough to inhibit water movement into the soil, grass in the arc may turn brown. The mushrooms that appear after a rain are the fruiting bodies of the fungus. The organic matter a fairy ring breaks down is often tree stumps, roots, logs, lumber or other large pieces of organic material found in the soil below the lawn. Once this material is depleted, the fairy ring disappears. This may take considerable time.

I worked at the Potholes & Prairies Birding Festival in and around Carrington, N.D. While there, I hung around marshes and wet meadows and was rewarded with great looks at Nelson’s sparrows. As I am married to a Nelson, I might be heir to the great Nelson sparrow fortune — or not.

Oak trees are broadly divided into white oaks and red oaks. Acorns in the white oak group mature and drop all in the same year, meaning that they are capable of producing acorns every year. That doesn’t mean that they will. White oaks produce a good crop of acorns every two or three years. Acorns of red oaks take two full years to mature. They flower one year, don’t produce acorns until the second fall, and yield a bumper crop every four to six years. Acorn production is not necessarily synchronous among trees of the same species.

In a study published in the journal Frontiers in Evolutionary Neuroscience, yawning was found to vary by season. People are more likely to yawn in winter than summer.

“While others may argue about whether the world ends with a bang or a whimper, I just want to make sure mine doesn’t end with a whine.” — Barbara Gordon