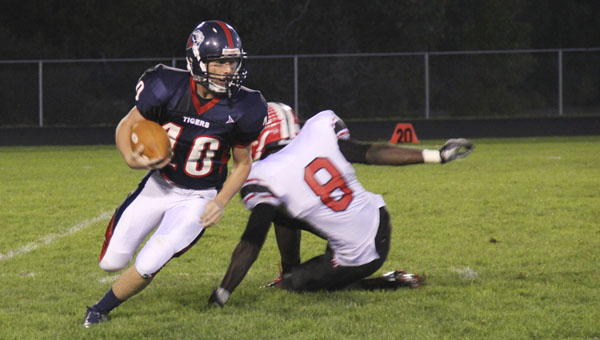 There came a pass-interference flag on a long pass to receiver Cody Scherff for a 15-yard penalty. Then a 33-yard scamper by halfback Ethan Abben into the end zone made the score 12-12. 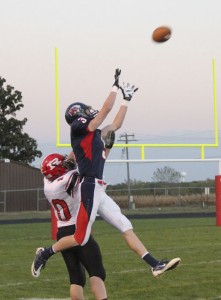 There were 7 minutes and 16 seconds left in the first half Friday at Jim Gustafson Field, and the Albert Lea Tigers were tied with the No. 10 team in the state, the Rochester John Marshall Rockets.

Tigers head coach Max Jeffrey said he has spoken with his players about effort and persistence before the game.

“We surprised John Marshall for a little while there,” Jeffrey said.

The Tigers ended up losing 48-18 on Friday. They head into Homecoming Week and face Winona next week.

After the Tigers began with a stiff defense, the Rockets launched to a 12-0 lead. John Marshall’s first touchdown came on a 2-yard run by running back D’Von Vanderbilt with 7:21 left in the first quarter. 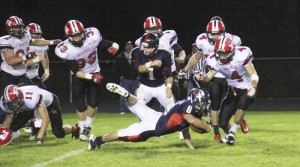 An Albert Lea fumble on the next drive gave the Rockets the ball at the Tigers 25, where Rockets quarterback Aaron Grad then tossed to receiver Janek Walker on a post route for a second touchdown.

The Tigers mounted a drive that threatened to end at the goal when Abben marched in from one yard out to make it 6-12.

Just two minutes after tie score, John Marshall came back with a 26-yard touchdown pass to receiver Michael Bosshart. The Tigers stopped the Rockets on the conversion, but a roughing-the-passer penalty allowed the visiting team another shot from just a yard out. They ran it in, making the score 20-12. 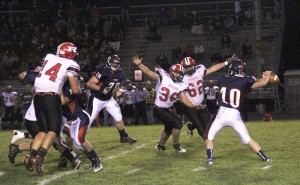 Quarterback Derek Burkard ran the kickoff back to the Rockets’ 34 yard line, but the team failed to get moving. The Rockets took over on downs and in the drive had a 39-yard gain on a pass to Alex Brady. A 10-yard fade to Bosshart scored a touchdown followed by a successful point after.

The Tigers stalled in their own territory and on fourth down tried a fake punt. The pass was long. John Marshall took over with 50.5 seconds left in the half, and with 20.7 seconds left scored on a 21-yard touchdown pass to Brady. The score at the half suddenly was 34-12.

Jeffrey said he was to blame for the fake punt call. He said he was glad to see improved play by his linebackers and strong play by Burkhart and by sophomore quarterback Tristan Westerlund in the fourth quarter. 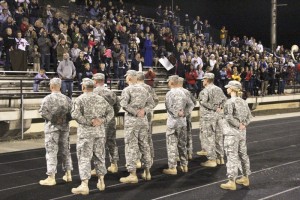 The third quarter was mostly John Marshall’s, but life returned to Albert Lea in the fourth, with an interception by Abben at their own 18 yard line. The Tigers couldn’t move the chains on that one; however, they did on the next drive, with Westerlund tossing a 20-yard touchdown pass to Scherff with 6:08 left in the game.

Jeffrey said effort and persistence should give the Tigers a good shot in the game against Winona next Friday if the players don’t get distracted by Homecoming activities all week.