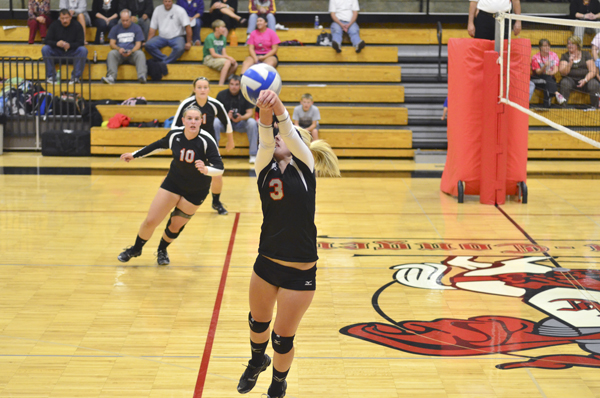 Alli Songstad makes a save Monday night during a match against the Awesome Blossoms of Blooming Prairie. -- Buck Monson/Albert Lea Tribune

ALDEN – On Monday night the Alden-Conger Knights got off to a good start winning game one over Blooming Prairie by a score of 25-20, in a tight battle. What continued to be a close match ended four games later with an Alden-Conger loss 3-1. 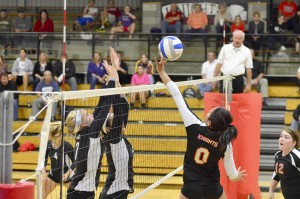 Ariel Keller gets a couple fingers on the ball after her spike was blocked by the defenders.

“We started out really well,” said Knights head coach Jolene Bute. “We have done that several times this year. We get up on top, and we play really well during that first game and we struggle to keep that consistency.”

In game two the Awesome Blossoms came out with a fury of kills and aces to get on top 17-6. The Knights put up a few minor surges of points, too, with the Blossoms finishing the game with a block to take it 25-16.

The even match added extra intensity in game three. Each team played strong throughout the game, nearly matching each other point for point all the way to the 23-23 score. The game ended with two Awesome Blossom kills.

“I just felt like Blooming Prairie just moved really well,” Bute said. “They are where they need to be, when they need to be there. And they just kept battling, they stayed in there. They are a very scrappy team.”

Up two games to one, the Blossoms had some momentum after the hard fought win in game three. They got off to a comfortable lead in game four and wore out the Knights by the end of the solid play, for the 25-15 win.