Cats don’t need to worry about the threat of hawks

“Everything is nearly copacetic.”

“New York, New Jersey and New Hampshire. It rained recently, but the dust was blowing so hard I didn’t see it. I got my electric toothbrush tangled in my beard. My sister Cruella is mad at me. Apparently, I used the wrong fork to scratch myself in that fancy restaurant. I locked my keys in my car when I went into the Eat Around It Cafe. I called Still Bill. Whenever he thinks he’s gone to bed early, he just hasn’t gotten up yet. I asked him to bring me a coat hanger. He did that, but have you ever tried to open a car door with a wooden coat hanger? I took a letter to the post office. I bought a stamp and asked if I had to put the stamp on myself. The clerk told me, ‘No, it goes on the envelope.’ I noticed a piece of paper posted on a utility pole near my home that read, “I lost 40 pounds in two months,” followed by a phone number to call for more information. I called the number and told the person who answered the phone, ‘I found them. Don’t lose any more.’” 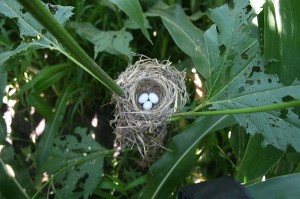 Bryce Gaudian took this photo of an indigo bunting nest.

I watched as a retailed hawk flew overhead. It was a plastic shopping bag that had been set free and took flight.

I was unhappy to see such a thing. Plastic bags sack the landscape and are far too persistent.

Later, I spotted a dead cardinal on the road near my home. It was a male that had visited my feeders regularly and had nestlings to feed.

Not a happy sight. Cars hit birds and birds hit windows. Those things are going to happen, but let’s keep the retailed hawks from flying.

The blessing of baby buntings

Bryce Gaudian of Hayward found an indigo bunting nest in a giant ragweed plant while he was dispatching weeds from a cornfield. Bryce said that it was as if he’d found a gold mine on his farm because, other than brown thrashers and kingfishers, the indigo bunting is his favorite bird. Bryce added that helping to make his sighting off-the-charts sweet, is that he has a dear friend, Randy Fossum, and a mother-in-law, Edie Tennis, who  rub it in that they see indigo buntings before Bryce does every spring and see more of them than Bryce does. Up until the discovery in his field on July 31, he’d been hanging his head all spring/summer because he’d not seen even one on the farm.

“Could a bald eagle eat too much to fly?” Young eagles sometimes make the mistake of overheating, which makes them too ill to fly. We’ve all been there. They recover if allowed to.

Robert Sibilrud of Hartland asked if hawks would kill cats. No hawk would ever kill a cat kept indoors. With cars, dogs, coyotes, disease and a neighbor who hates cats, a hawk is the least of a cat’s worries. The outdoors is not a feline’s friend. It would be possible that one would attack a cat, but not probable. A red-tailed hawk will occasionally feed on roadkill and that might include a declined feline. A great horned owl will prey upon cats. I have never talked or heard from anyone who has seen a hawk take a cat, not even a small kitten — other than on a forwarded, forwarded, forwarded email. Consider a cat of your acquaintance that you have tried to take somewhere it didn’t want to go. It’s more than a handful. A small hawk — and all of ours really are — would have a battle on its talons. It would be a battle it might not win. I know of a cat killing a red-tailed hawk used as an education bird. The University of Georgia did a study on house cats. As a cat owner (of two black cats that have never set a paw outdoors), I found the research enlightening. Reptiles and amphibians took the brunt of the feline assault. Lizards, snakes, and frogs made up 41 percent of the animals killed by the Athens, Ga., area cats equipped with collar cameras. Rodents (chipmunks, voles, etc.) made up 25 percent of the prey, insects and worms 20 percent, and birds 12 percent. Birds can fly or their numbers would be higher. The study found that 30 percent of roaming house cats kill prey — an average of two animals per week. Cats brought home 21 percent of what they killed, ate 30 percent and left 49 percent at the scene. The cats exhibited some risky behaviors — 45 percent crossed roadways, 25 percent ate or drank things they found, 20 percent explored storm drains and 20 percent entered crawlspaces. Whether it becomes predator or prey, the safest thing to do is to keep a cherished cat indoors.

“I enjoy watching birds. How many people in the U.S. share my hobby?” According to a survey done by the U.S. Fish & Wildlife Service, 71.8 million people 16 years old or older fed, photographed and observed wildlife in 2011. Birdwatchers make up 46.7 million of that number. Wildlife watchers spend $55 billion annually. There was no significant change in the number of wildlife watchers from 2006 to 2011, but there was a 7 percent increase in the money spent on wildlife-watching from 2006 to 2011. Comparing the 2011 survey with the two previous surveys done by the USF&W shows no significant change from 2006 to 2011 and a 9 percent increase from 2001 to 2011 in overall wildlife-watching participation. Adding children to the survey would increase the numbers substantially.

“It’s not what you say out of your mouth that determines your life, it’s what you whisper to yourself that has the most power.” — Robert Kiyosaki