No net for Knights 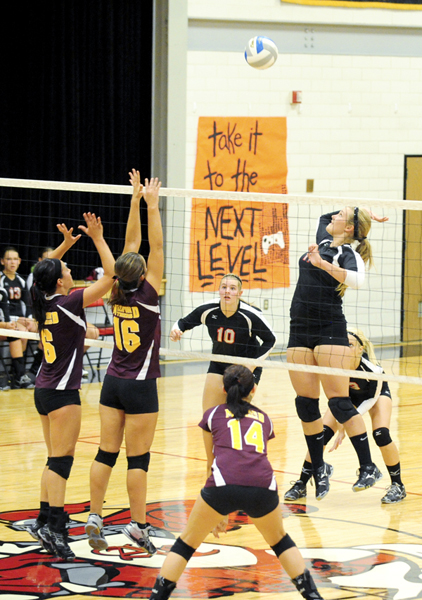 Alden-Conger’s Liesel Theusch hits the ball over the net during game two against Medford on Monday at home. -- Brandi Hagen/Albert Lea Tribune

ALDEN — The Alden-Conger volleyball team put up quite the fight during game 2 against Medford on Monday.

The two teams volleyed back and forth until the very end when the Tigers secured a 30-28 win.

After losing a close first game (25-21) and an even closer second game, the discouraged Knights quickly lost the third game 25-9.

“I feel like it wasn’t as good of volleyball as we can play,” said Knights head coach Jolene Bute. “It was close and intense, and we need to learn how to close those games out.”

Bute said the team would play better if they weren’t so tense.

“They didn’t really have a reason to be tonight,” Bute said. “We only graduated one last year so we just need to learn to have more fun playing.”

Going in to the game, Bute expected Medford to be a solid team.

“They were,” Bute said. “They do a nice job of covering the court, and they’re good about keeping their serves in.”

Bute said the Knights did a good job playing offensively when they had the chance, but they were caught on the defense too often to show what they were capable of.

Two of Alden-Conger’s players, Ariel Keller and Alli Songstad, were 100 percent in serving for the team.

Bute said the team will be working on its consistency in passing and serving moving forward.

The Knights are back in action tonight against Martin Luther.