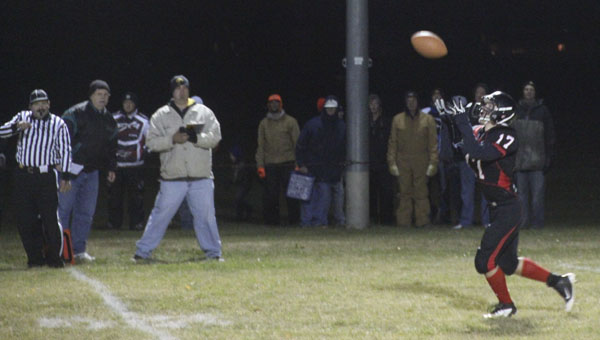 ALDEN — The Knights of Alden-Conger High School lost for the sixth-straight time this season, but the margin of defeat was less than the other five games.

Granada-Huntley-East Chain/Truman (2-4) scored 46 points Friday night while Alden-Conger (0-6) placed 6 points on a broken scoreboard that wouldn’t show the clock. Time was kept on the field. 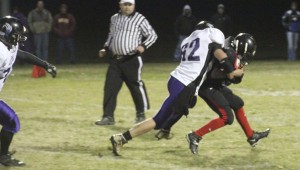 Alden-Conger coach Bruce Smith said the Knights are a young team. Most of the them are sophomores and freshmen taking on players who simply are bigger than they are.

“They keep working at it. It gets to be a long season,” Smith said.

Alden-Conger celebrated Homecoming Week. Allison Songstad was crowned queen, and Chaz Mithun king. The air temperature at the 7 p.m. kickoff was 39 degrees, with a crisp northwest wind of 12 mph with 20 mph gusts. 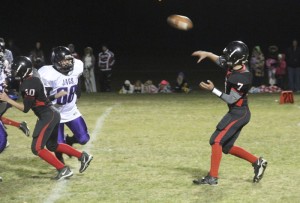 That didn’t stop A-C senior Dom Ofsdahl from returning a kickoff for 84 yards for a touchdown near the end of the first quarter. That warmed the crowd and made the score GHEC/Truman 14, A-C 6.

The Knights’ first drive stalled. So did the first drive by the Jaguars. On the second drive, A-C quarterback Jordon Johnson threw an interception. The Jaguars then in a five-play drive put the first points on the board with the first of three touchdowns by senior running back DaMarko Thomas, who ended up suffering an apparent knee injury in the final quarter. His second touchdown was a 43-yard scamper down the home team’s sideline.

In the second quarter, Jaguar wide receiver Josh Johanson scored on a 25-yard rushing play. In the fourth, running back Jared Green broke several tacklers and traveled 32 yards to reach the end zone. 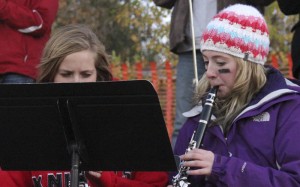