Memorial services for Ann Grund will be at 2 p.m. Saturday at Bayview/Freeborn Funeral Home, Albert Lea. Deacon Mike Ellis will officiate. Interment was held at St. James Catholic Cemetery. Visitation will be one hour prior to the service. Online condolences are welcome at www.bayviewfuneral.com. 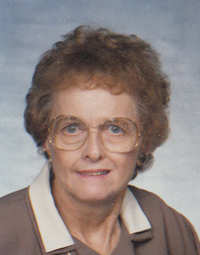 Ann Grund was born in Austin on March 12, 1927, to Barney and Katherine (Schumacher) Hangge. She grew up on a dairy farm in the Austin area. Ann attended Catholic schools in the Austin area and worked at Hormel Foods until her marriage to Lewis Grund in April of 1953. She then moved to the Emmons area and spent the next 20 years raising her family. After her family was grown, she worked at the Lake Mills Nursing Home until health issues forced her into early retirement. Ann was a very devoted homemaker and mother. She was an excellent cook and enjoyed gardening and canning. Ann was active in St. James Catholic Church in Twin Lakes receiving the bishop’s award from the Diocese of Winona.

Ann was preceded in death by her parents; sisters Vera Bissen and Alberta Gavin; brothers: George, Barney and Frank Hangge.