“Everything is nearly copacetic. Still Bill came over yesterday. He’s a farmer CPA — Can’t Produce Anything. I’d sold him a cow. Nice cow. Should have been on the cover of a magazine. Two days after I sold the cow, it drops dead. Still Bill was madder than a wet hen.”

“Did you give him his money back?” I wonder aloud.

“Of course, not. That cow never died even once while I owned her. Still Bill had his uncle Farley with him. Farley had his nose held higher than the price of gas. He always carries a walking stick. Farley used to live out west somewhere. One day, he encountered a rattlesnake. The snake struck at him, but hit the stick. The stick had two little bite marks from the fangs. By the time Farley got home, that stick had swollen to the size of a fencepost. He called all the neighbors to come have a look at it. When they got there, it had swollen to the size of the biggest tree on the ranch. Farley hauled it to the sawmill where they turned it into enough boards that Farley built a henhouse out of them. Unfortunately, when the swelling went down, that henhouse shrunk to the size of a wren house.”

Natural history by the yard 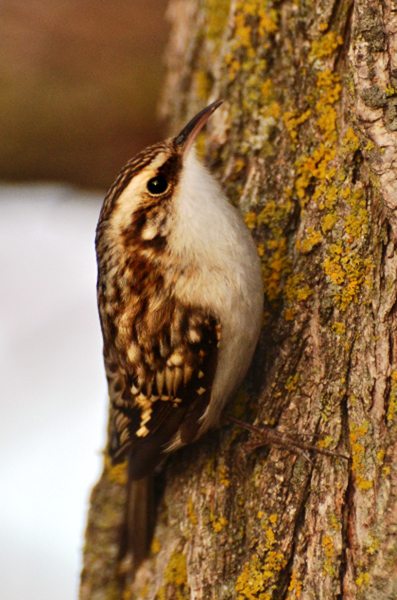 Darcy Sime of Alden took this photo of a brown creeper.

It was nice to step outside and not be punched in the nose by the dead skunk on the road. The skunk’s final spray smell had either faded or taken the day off. A chipmunk was making a stump speech in the woods near my house. In autumn, chipmunks gather seeds and other foods into their cheek pouches and carry them to their burrows to store for winter. This chipmunk didn’t have bulging cheeks as it made its “chuck” call. Chipmunks also make a high-pitched “chip” call when they are alarmed. The chip sounds like a birdcall. Some researchers believe that the “chip” is made in response to danger on the ground, while the “chuck” is in response to a predator in the air. I listened for a bit before succumbing to the need to be gainfully employed. Before leaving, I wished Chip, Dale, Alvin, Simon or Theodore the very best of days.

Marion Poellot of Red Wing asked how to distinguish house finches from purple finches. Here are a couple of things to look for. The female purple finch has a bold white eyebrow and a dark throat stripe. A purple finch male exhibits extensive red on the head and back.

“Someone told me that if I paint the ceiling of my porch a light blue, the wasps and birds think it’s part of the sky and won’t build nests there. Is this true?” The Grand Hotel on Mackinac Island apparently has the ceiling of its sizeable porch painted blue to fool the birds. I know that painting porch ceilings this color is a Southern tradition. What I don’t know is if it works to discourage nesting. I doubt it, but am always willing to listen to those who claim that it does. Another man told me that he fills about a quarter of a jug with liquid dish detergent, the rest with tap water and pours the mixture into a yellow jacket nest. He claims it is effective and that he has never been stung. He might be an extremely fast runner. It likely works, but I would be cautious around any insects that sting. Pour the concoction at night when the wasps are less active. I know that such a treatment works fine on a number of insects that are pests in the garden and boxelder bugs.

The Incas believed that the Andean condor, with its 10-foot wingspan, carried the sun into the sky each morning.

Judy Boyd of Red Deer told me that she applies used cat litter to pocket gopher mounds to make the gophers vacate the premises. Judy, who volunteers in wildlife rescue and rehabilitation, said that she once rescued a cormorant that had landed in a kiddy pool in LaCombe, Alberta. Judy hurried to remove the bird before everyone wanted a cormorant in his or her kiddy pools. The bird was unhurt and released into bigger water.

NASA engineer Mark Rober says that statistically 6 percent of drivers are animal-haters. Rober placed rubber snakes, turtles and tarantulas on the shoulder of the road and observed the actions of 1,000 vehicles. Six percent of those drivers proved to be “cold-blooded rubber-animal killers” who were willing to put themselves at risk in order to drive over an animal on the side of the road.

No, he wasn’t a superhero. He was spotted in Utah, on his hands and knees, lurking among wild goats. He wore a crudely made goat suit. Wildlife authorities were concerned. The fellow didn’t seem to be harming anything, but he might have been in danger during the hunting season. There is no hunting season on men who dress like goats, but there is a season on wild goats. The man turned out to be an archery hunter who wanted to make certain he could get close enough to a goat for a good kill. He was practicing his goat stalking. The man prefers to remain anonymous, but look for him at your door on Halloween. There will be a herd of goats with him.

“You can be the most beautiful person in the world and everybody sees light and rainbows when they look at you, but if you yourself don’t know it, all of that doesn’t even matter. Every second that you spend on doubting your worth, every moment that you use to criticize yourself, is a second of your life wasted, is a moment of your life thrown away. It’s not like you have forever, so don’t waste any of your seconds, don’t throw even one of your moments away.” — C. JoyBell C.

“The man who keeps busy helping the man below him won’t have time to envy the man above him.” — Henrietta Mears