Flying squirrels are active in May, June and October

“Everything is nearly copacetic. My sister Cruella has been on my case. She says that the windows of my house are too dirty to see out of. I told her that if I wanted to see out, I opened a window. She’s a constant torment to me because she’s between jobs. She worked two weeks on a gig, took a two-week vacation, and gave two weeks’ notice. She holds no love for self-improvement but is determined that I better myself. She’s counseling with Still Bill in the hopes that he can help her find a job. Still Bill applied for a job last year. He was told that they needed a reference from his last employer, but he couldn’t get one.”

“His last employer has been dead for 30 years. I have no trouble with jobs. I know people. I remember talking to Gov. Jesse Ventura and he gave me some great advice.”

“Really?” I slobber a bib full.

“Yeah. He was chowing down at the Eat Around It Cafe and I walked right up to him and asked if he had a job for me.”

“And what advice did he give you?” I ask.

“He told me to go away. That’s how I found that job in Iowa.”

Which one was the nut?

Erwin Hill of Albert Lea told me that he had obtained a metal birdhouse that had been designed to look like a giant acorn. Erwin wasn’t enchanted with the birdhouse, but he put it up and the birds loved it. One hot, summer day, Erwin noticed the birds peeking out of the entrance hole and panting. Erwin felt sorry for them and filled a watering can. He placed a stepladder near the birdhouse, carried the watering can up the ladder, and began pouring water onto the birdhouse. Erwin thought he was cooling the birds, but what he was doing was entertaining the neighbors who saw Erwin watering a giant acorn. 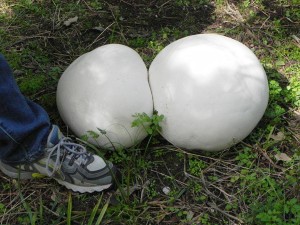 Al Batt took this photo of some large puffball mushrooms.

John Beal of Faribault writes, “Hello Al, just a bit of trivia for you in the hawk world. My wife and I noticed a red-tailed hawk dead on a power pole about a mile from our home. I asked the operations manager at Steele-Waseca Cooperative Electric what could have happened? He said many times a red-tail will pick up a long snake and go to the pole to eat it. With the snake hanging down and making contact with the neutral his time on earth is over instantly.”

Birding can be hard on the brakes

Judy Boyd of Red Deer, Alberta, told me that her mechanic had commented that someone had been a bit aggressive with her braking the car. Judy explained to him, “I’m a birder. When someone says, ‘Bird,’ I stop.”

Tony Blake of Red Deer told me that he had worked for the railroad for many years. He said that robins often built nests on train cars only to see the nests disappear down the tracks.

Ric McArthur of Morpeth, Ontario, writes, “We have flying squirrels that come to our seed feeders after dark. The are active from late May through June and then again in October. My wife, Anne, suggested I leave a feeder out as she had heard footprints on the roof.”

“How can I tell the difference between a fox and a coyote?” The red fox has a white tip on a tail that is nearly as long as its body. The body color may vary, but it will always have a white tail tip. It has black behind its ear tips. The gray fox, generally seen less often than the red fox, has a black tip and black line on its tail that’s about the length of its body. It has orange behind the tips of its ears. A coyote’s tail is much shorter than its body.

“Were multicolored Asian lady beetles released in this country to eat soybean aphids?” No. This lady beetle species, also known as the Halloween lady beetle, cluster in large numbers around houses during fall as they search for protected sites to overwinter. This beetle is a native of eastern Asia. These insects were released by the USDA in California in 1916 and 1964 for biological control of pecan aphids. Similar releases were made in other states through 1982 as part of a federal effort to control insect pests in trees. Despite these releases, the lady beetles didn’t appear to become established. In 1988, a population was found in Louisiana that spread quickly throughout parts of the U.S. They were first sighted in Minnesota in November of 1994. The first report of major infestations occurred in 1998, and by 2000 the insect was generally distributed throughout the state. No one knows whether their presence today is due to deliberate releases or accidental introductions, but they were never a part of a release program in Minnesota. The multicolored Asian lady beetle looks similar to other lady beetles but is generally larger. Its appearance is variable, ranging from orange to yellow to red, and it typically has 19 black spots which vary in appearance from well-defined to faint traces on its wing covers. It may have fewer than 19 spots or none at all. The most reliable identifying characteristic of the multicolored Asian lady beetle is the prominent black M-shaped marking behind its head.

“What are puffballs?” Puffball mushrooms are saprotrophs, meaning they feed on dead organic matter. They often appear in the same place each year. These mushrooms fruit in late summer to early fall and appear quickly. Young giant puffballs have a white, fleshy interior. They become brown and discolored when past their prime.

One puffball was reported to be 59 inches around.

Albert Lea Audubon will be holding a bird seed sale from 8 a.m. to 4 p.m. on Nov. 10 at Albert Lea Seed House.