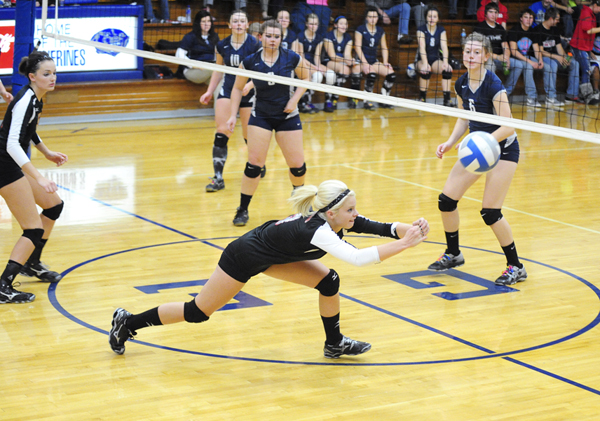 Alden-Conger’s Alli Songstad dives to save a ball Monday during a match at Glenville-Emmons High School. -- Brandi Hagen/Albert Lea Tribune

GLENVILLE — A rival match between the Wolverines and Alden-Conger ended in a 3-0 win for the Knights on Monday in Glenville.

Alden-Conger picked up the first set of the night easily and quickly 25-3.

“We played like we can in the first game and then it kind of leveled out,” Knights head coach Jolene Bute said. “That’s kind of the way we play.”

Bute said her team likes to see how far they can push their limits.

“We’re trying to be aggressive and there’s times that we aren’t and we let everybody else control the game,” Bute said. “When we’re on, nobody can beat us.”

The two teams are polar opposites. The Wolverines need to work on getting fired up because that’s when they perform at their best and according to Bute, the Knights need to relax to play at their capability.

“If they get nervous, they just get tentative,” Bute said. “We’re right in the middle of an intense game and I’ve got to crack a joke in the huddle for them to relax.”

Something clicked into place for both teams in the third set with the lead switching between them through till the end.

“Glenville-Emmons found a couple of our weak spots to tip it into and we weren’t ready for it,” Bute said. “But, we almost stay more focused when we get the really tough, close games like game three.”

As the game edged closer to the 25 point mark, the crowd went wild screaming and cheering for either team. Glenville-Emmons had a chance to make it into a five-game match when they got to 24 first, holding the Knights at 22, but hit a couple balls out-of-bounds and missed an Alden-Conger serve to fall 26-24.

“We’re giving the crowd some excitement for their money,” Ziebell said. “We’re playing good volleyball, but now we need to learn to take more chances and swing when we need to.”

Ziebell said the Wolverines’ toughest thing on Monday was not winning when Alden-Conger’s Ariel Keller was in the back row.

“She’s an aggressive player,” Bute said. “She’s got a 25-inch vertical and she’s a spark plug on the court all the time.”

Both teams are on the court again tonight on the road. Glenville-Emmons will play Schaeffer Academy at 7:15 p.m. and Alden-Conger will play Lake Crystal-Wellcome-Memorial at 7:30 p.m.