Swallows travel on invisible highways in the sky

“Everything is nearly copacetic, but Carly Simon says there are clouds in her coffee. Still Bill, he’s as useful as chicken poop on a pump handle, and I are building new kitchen cupboards for Ma. Ma is as happy as a flea on a fat dog. I ignore what I can, but Still Bill uses a tape measure so old that all the measurements have been worn off. I asked him how he could use such a device. He told me that he’d been using that tape measure so long, he could remember where all the markings used to be. Still Bill, he’ll never work himself to death but he might rest himself there, gets up early so he’ll have more time to do nothing. He told me that I should arise sooner. I don’t know why I listen to him. When Still Bill has a headache, he takes four aspirins — one for each corner of his head. But I thought that if Still Bill could get up early, so could I. Now I set my alarm clock for 4 o’clock each morning.”

“Why do you get up so early?” I wonder aloud.

“I don’t get up, but I get great joy in turning off the alarm and going back to sleep.” 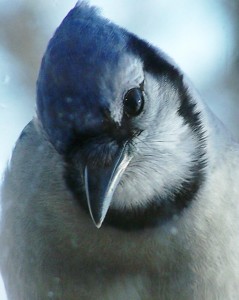 Photo of a blue jay by Al Batt.

I spotted a large flock of wild turkeys near the Fort Snelling Cemetery. I’ve seen many grasshoppers and they’re a favorite food of poults. On my drive home, dead raccoons dotted the road. Why did the raccoon cross the road? To get to the middle.

I went for a hike later. The last time I walked the trail, swallows traveled on invisible highways above me. I watched bank, barn and tree swallows in flight. The bank swallows looked as if they were wearing bankers’ bowties, the barn swallows carried forks (tails), and the tree swallows looked nothing like trees. Those swallows had left the area. Spider webs hit me in the face as I walked the trail. I like spiders. I don’t measure other living creatures. I marvel at them. A young northern harrier flew from the side of the trail. I knew it was a juvenile because of a rusty wash underneath. I suspect it had a prey item, but I found no evidence. Later, I spotted a Cooper’s hawk flashing by and a red-tailed hawk soaring overhead. The red-tailed hawk had a brown tail. A redtail is probably the most commonly seen hawk in North America, but doesn’t get a red tail until following the molt in the year after its hatch year. The Cooper’s hawk (An accipiter) is slender like a fighter plane and the red-tailed hawk (a buteo) is bulky like a bomber.

A caller asked where all the birds were. A few minutes later, another caller told me that she’s never had so many birds at her feeders. As birds search for food, they don’t take the time to distribute themselves equally. No one called to ask where the squirrels were. There are two groups of oak trees, red oaks with high fat and high tannin acorns, and leaves with pointed lobes; and white oaks with less fat and tannin in the acorns and round-lobed leaves. Red oak acorns remain dormant through the winter whereas white oak acorns germinate almost immediately. Squirrels store red oak acorns and eat white oak acorns. They might store a white oak acorn, but only after biting off the end of the nut containing the embryo to prevent germination.

“What is the difference between a wasp and hornet?” There are many answers to this question, but the term “hornet” usually refers to a kind of wasp that builds a papery nest. A prime example is the bald-faced hornet that builds large football-shaped nests made from chewed wood.

Darwyn Olson of Hartland asked why blue jays are so noisy in the fall. When nesting, they tend to be secretive. Fall flocks form and migration begins. They’re vocalizing their discoveries of food, predators, family and friends. The blue jay frequently mimics the calls of hawks. These calls may warn other jays that a hawk is present or may deceive other species into believing a hawk is near. Mark Twain wrote, “You may call a jay a bird. Well, so he is, in a measure — because he’s got feathers on him, and don’t belong to no church, perhaps; but otherwise he is just as much a human as you be. And I’ll tell you for why. A jay’s gifts and instincts, and feelings, and interests, cover the whole ground.” Twain added, “A jay hasn’t got any more principle than a Congressman.”

I spoke to a gathering of the Red Deer River Naturalists in Alberta. A wonderful group. While there, I had the pleasure of getting a tour of the Ellis Bird Farm in the Lacombe area from Myrna Pearman, the director of that fine enterprise. Ellis Bird Farm was established in 1982 to maintain the legacy of Charlie and Winnie Ellis whose farm was a well-known provider of nesting habitat for mountain bluebirds. The couple sold their land to Union Carbide Canada Ltd. on the condition that the company continued the couple’s conservation efforts. Three hundred twenty acres support a petrochemical complex, a section (640 acres) is farmed, and 112 acres are reserved to promote environmental education, mountain bluebird and tree swallow conservation, a winter bird feeding program, scientific research on cavity nesting birds, and public education. It’s a delightful place where a bird bum like me feels at home.

Myrna told me that she remembers well the first great grey owl she saw. It was a stormy day and lighting hit the tree next to the one holding the owl. And there are those who think that birding isn’t exciting.

“Life appears to me too short to be spent in nursing animosity or registering wrongs.” — Charlotte Bronte

“As I make my slow pilgrimage through the world, a certain sense of beautiful mystery seems to gather and grow.” — A. C. Benson