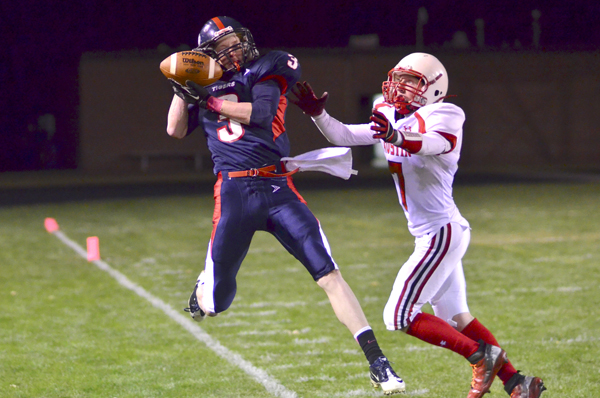 Dylan See-Rockers attempts to make a catch Wednesday night against Austin in the final home game of the season. -- Buck Monson/Albert Lea Tribune

ALBERT LEA — The Albert Lea football team found its stride with a late first half drive and then it took over the game completely in a 40-19 win over Austin at home Wednesday. The last time the Tigers didn’t win over the Packers was in the 2006-07 football season.

After trailing 7-6 at the half, the Tigers came out and poured in 26 points in the third quarter as Ethan Abben, who ran for 119 yards and three scores, scored a pair of touchdowns in the frame, Makael Lunning had a 2-yard score and Lucas Hansen picked off a pass and ran it back 65 yards to put the Tigers up 34-7.

“We had a nice second half against East and Winona and we’ve played some of our best football in the second half,” Tigers head coach Max Jeffrey said. “We weathered the storm in the first half and took their punches.”

Albert Lea opened the second half by kicking off to Austin, but they went with a high floating kick and Austin fumbled the ball away. The Packers (2-6 overall, 2-5 Big Nine) also fumbled on their first play of their next possession.

“The kickoff landed in the right spot and that was a big momentum swing for us,” Jeffrey said.

The Tigers (2-6 overall, 2-5 Big Nine) allowed a blocked punt for a touchdown on their first possession of the game, they came up short on a fourth and three at the Austin 16-yard line and threw an interception on their next two possessions. Finally, right before the half Albert Lea went 85 yards on seven plays to pull within 7-6 when Ethan Abben caught a 10-yard touchdown from Derek Burkard.

“In the first quarter and a half they took away our perimeter guys and we had to readjust. Our offensive line really stepped up for us tonight,” Jeffrey said.

While the Tigers had a big lead going in to the fourth quarter, Jeffrey didn’t think the game was put away yet.

“Austin is well coached and they run that hurry up offense that can put up points in a hurry,” he said. “We had to close it out.”