Giants vs. Cardinals would be all-avian World Series

“Everything is nearly copacetic. The boys got me a computer. I’ve learned that on the Internet, a guy can be anything wants. It’s odd that so many people choose to be stupid. I worry that I’ll spend too much time seated in front of a computer. I don’t want to put on weight. I don’t have any sideways now. I’ve been making a bucket list of things I want to do before I die. So far, I have only one thing on the list.” 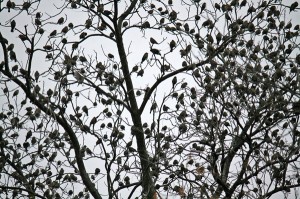 Bryce Gaudian, of Hayward, took this photo of a tree filled with birds.

I walked on the lawn. I considered stacking the leaves. Raking them into piles is the lazy man’s way. I was a bit bummed by the teams that had made it to the World Series. The Giants versus the Tigers. I was hoping that the Cardinals would be playing the Orioles — an all-avian series.

A great number of blackbirds flew into a nearly leafless tree. The birds became the foliage.

A chickadee called from an arborvitae. As I walked past that dense greenery, a mourning dove flew out. I recalled a Grateful Dead song, “Side by side in the family tree. The dove and chickadee sing for free. Outside, when the weather is cold. Warming up with harmony laid in gold. The sound of music and words of love. Songs of chickadee and the dove.”

Later, I watched as a chickadee hectored a hawk that had the audacity to venture into the chickadee’s territory. The chickadee, cute and so tiny that I could put three of them into an envelope and mail for a single forever stamp, is a fierce creature. It’s not considered an apex predator, but I’ve held them in my hands and experienced their wrath. If the chickadee were the size of a chicken, none of us would dare go outside.

It was March. I was in Nebraska. It was cold. It was dark. I was in a primitive blind waiting for daybreak. I was there to see countless sandhill cranes come off the Platte River like smoke off the water. Most of the people who joined me were in a state between sleep and thrilled to pieces. Being thrilled to pieces is an odd and scary place to be and I don’t fully understand what the pieces are. I digress. There we were. Most of us dressed similarly, but in different colors. At least, I think they were different. It was very dark.

We waited in the dark as it began to weaken. There was nothing else to do. A woman standing near me whispered, “Look at my husband. He’s sleeping.”

I squinted like Clint Eastwood and could see a man lying against the wall. He did appear to be snoozing. It wasn’t a bad idea. I watched as the woman walked over to the sleeping man and grabbed him in a familiar way. The man said something sounding like “Yerp,” bolted upright, and banged his head sharply on a wooden bench.

The woman stepped back just in time to hear her husband, who had been standing behind her all the while, ask, “What are you doing?”

Seeing in the dark

I walked through the darkness of an Alberta urban park with Scott Hoyland of Red Deer. Scott was doing some thermal imaging. Thermal imaging cameras convert the energy in the infrared wavelength into a visible light display. This allowed us to locate living things in an area lacking ambient light. I saw plenty of roosting robins and a Townsend’s solitaire. And my father said that nothing good ever happened after midnight.

Wayne and Shirley Gunderson of Albert Lea ask where great horned owls nest and how many young they have. The great horned owl uses a variety of nest sites, including trees, cliffs, buildings and the ground. It doesn’t make its own nest, typically taking over nests in trees made by other bird species such as hawk, crow or heron. It will nest in tree hollows or broken snags. It lays one to five eggs.

Tom Benson of Hartland asks if it’s OK to feed salted peanuts to the birds. There is no scientific data to prove that the periodic use of salted peanuts harms birds, but large doses of salt can’t be good. Rain and wind might strip some salt from the peanuts and the availability of water might mitigate salt’s dehydrating effects, but I think it would be better to feed unsalted peanuts to birds. Birds get salt through their natural foods. Providing excessively salty foods at bird feeders does birds no favor. Many of us feed peanut butter occasionally, but it might not be a bad idea to limit it to peanut butter that isn’t high in salt content.

You don’t need to be a worm

The early bird gets the worm, but you can attract birds by shopping at Albert Lea Audubon’s Bird Seed Sale held at the Albert Lea Seed House from 8 a.m. to 4 p.m. Nov. 10.

“I have one share in corporate Earth, and I am nervous about the management.” — E. B. White

“A day without laughter is a day wasted.” — Charles Chaplin