The funeral service for Ruth M. Berg, of Albert Lea, formerly of Emmons, will be at 10:30 a.m. Friday at St. Theodore Catholic Church. The Rev. Timothy T. Reker and Deacon Mike Ellis will officiate. Interment will be in Fort Snelling National Cemetery. Visitation will be one hour before the service at the church. Bonnerup Funeral Service is assisting the family with arrangements. 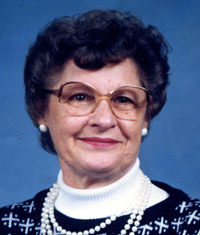 Ruth was born on a farm near Waltham on July 25, 1923. She graduated from Blooming Prairie High School. On Aug. 5, 1944, Ruth married Elmer E. Berg at Fort Riley, Kan. When Elmer returned from the service, they made their home in Emmons.

Throughout her life Ruth had worked at the Emmons Corner Café, Arrowhead Golf Course, Johnson Floral and sold Avon products. Due to her failing health, she moved to Oak Park Place in Albert Lea in 2007.

She had been an active member of St. James Catholic Parish in Twin Lakes. Ruth was also involved in the Civic Improvement Club of Emmons, the Senior Citizens and many other community activities. She loved to dance, golf, help with and play bingo, play cards and watch sporting events, especially her grandchildren’s. Ruth enjoyed being around people, making special treats like chocolate chip cookies, and having her family together.

She was preceded in death by her parents, her husband in 1999, her grandson Andrew Berg; brothers and sisters: Fred, Frank, Carl and Bob Fiebiger, Frieda Kvansnicka and Edith Kruckeberg.