“Everything is nearly copacetic. I haven’t been getting enough sleep. My eyelids are too short. I’ve searched my soul and discovered that I’m not good at introspection. I was just thinking that if my great grandfather were alive today he’d be the most famous man in the world.” 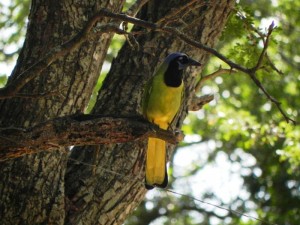 Al Batt took this photo of a green jay at Rio Costero.

“Nothing much, but he’d be 165 years old. I want to live at least that long. So I went to see Doc Splint Eastwood. The old quack has to thump his head to tell it from a watermelon, but he could talk a cat off a fish truck. After an eternity in the waiting room, my name was finally called. When I got into the examining room, the nurse pointed to the scale and said, ‘I need to get your weight today.’ I replied, ‘One hour and 10 minutes.’ I’m expecting some snow this winter. The state has decided to raise all the highway signs 12 inches at a cost of $5 million. They want to make sure that drivers will be able to see the signs above the snowbanks. That seems like a lot of money, but it could have been worse. If the job had been handled by the federal government, they would have lowered the highways.”

I never miss a chance to look out a window. I pay particular attention to the vegetation near the house in the spring and fall. That’s when the warblers move through. They are feathered jewels, but be careful watching them. The prothonotary warbler was the bird that established a connection between Whittaker Chambers and Alger Hiss in the 1940s. Chambers testified that Hiss enjoyed bird-watching and bragged about seeing a prothonotary warbler. Hiss testified to the same incident, causing members of the House Un-American Activities Committee to become convinced of the pair’s acquaintance.

I was at Rio Costero Ranch near Harlingen. I was looking at a large flock of red-winged blackbirds through my binoculars when I saw a merlin take one of them. It was fun for me to see. Not so much fun for the blackbird.

Playing hide-and-seek with a bird

I saw a common pauraque in the Rio Grande Valley. This beautiful bird rests on leaf litter and becomes virtually invisible to the human eye. Bill Thompson III, editor of Bird Watcher’s Digest, told me that he was having no luck finding the bird in an area where it had been seen earlier. Fearing that his 13-year-old son, Liam, might succumb to boredom, Bill offered his offspring a small financial reward if he could locate the bird. The offer had barely crossed Bill’s lips when Liam pointed and said, “There it is.”

A call from a nuthatch on line one

Rich Hoyer of Tucson does a Christmas Bird Count in Arizona. He uses a device that plays birdsongs in an attempt to find more countable birds. He plays the call of red-breasted nuthatches at midnight and the tiny birds respond. The song of a bird defines territory, attracts a mate and communicates things we can only guess at. Their voices strive to find a happy medium of getting in and out of the way of the singing of others.

I serve as a trustee for the American Bald Eagle Foundation in Haines, Alaska. The organization has raptors with appetites. Because of that ABEF raises 300 mice each month. Dave Olerud, the founder of ABEF, offices next to the mouse factory. Dave was not as appreciative of the odor of mice as one would expect. The folks at ABEF discovered that putting a bit of vanilla in the drinking water caused the urine of the mice to be less smelly.

Janet Buck of Gaylord asks if it’s true that higher muskrat mounds forecast deep snow. My father claimed that was a predictor of winter’s severity. There may be something in most old sayings, but in general, such conditions have natural causes and don’t indicate what the weather will be.

“Can an owl turn its head all the way around?” An owl’s eyes are fixed in its sockets, so it must rotate its neck to look around. An owl’s head rotation is part illusion and part structure. The actual rotation is about 270 degrees.

Keep your lid on

This is from Gary Seath who lives in California, “A while ago I got a birdwatching app for my iPad. While sitting outside at a cafe table, I watched some birds running around the tables. I pulled out my iPad and was able to identify the birds as juncos. The app had the bird sounds so I played some of the junco calls. Within a few seconds the birds were looking for the interloper. They appeared a little agitated. Before the last one of them left he had the last laugh, he bombed the top of my drink lid from the branches above the table.”

“Issue a blanket pardon. Forgive everyone who has ever hurt you in any way. Forgiveness is a perfectly selfish act. It sets you free from the past.” — Brian Tracy