“Everything is nearly copacetic. Except for the part where I woke up this morning and I’d grown a third eyebrow overnight. I asked myself, ‘How could my life get any worse.’”

“A rhetorical question?” I say.

“No, apparently it was a challenge. Someone asked me how I stay in the shape I’m in. I told him that I try not to move. If I warm up before I exercise, I’m too tired to exercise. It’s hard to lose weight when it has no better place to go.”

“Speaking of shape, do you have something on your mind? Your head looks lumpy,” I interrupt.

“I own the first Jeep made by Chrysler. It’s called a Creep. I’ve been fixing it up. The old windshield had more cracks than glass. I needed to run to town to buy a new one, so I drove the Creep without a windshield. It’s about three sees to town. I drive as far as I can see once and then I do that two more times. I didn’t figure it would hurt anything driving without a windshield. It was a short trip. Then it started to rain. Instincts caused me to turn on the windshield wipers even though there was no windshield. The wipers slapped me silly.”

On the road with a woolly bear

I listened to the wind as I walked to the mailbox.

I thought of Robert Frost’s poem that read, “Not yesterday I learned to know the love of bare November days before the coming of the snow.”

Thoughts of impending snow were discarded as my attention shifted to a small creature crawling across the road. It was brown in the middle and black on both ends.

It wasn’t an overdone hamburger, it was a woolly bear caterpillar. One day, the woolly bear would become an Isabella tiger moth, but this day, it hurried across the road. I picked it up. It rolled into a fine ball that would have made a hedgehog proud. I put the woolly bear down on the other side of the road. I hoped it would find a place to winter. The woolly bear is not only capable of surviving our winters. It becomes winter, freezing solid before reviving when warmer days return.

Marion Drescher of Alden mentioned her amazement at the ability of feeder birds to predict the weather. Birds feed intensely as air pressure falls. They have a natural barometer that is quite sensitive. This is a good thing because storms are generally associated with falling pressure and birds have a difficult time feeding during a storm. The ability to predict a storm gives them time to prepare.

Judy Boyd and Bill Heinsen of Red Deer, Alberta, learned of an eider duck near Banff. It took them a couple of days to find the time, but they headed out to see it. They spent a morning looking for the duck, but had no luck. They took a break to get something to eat. While in the restaurant, Bill bought the local newspaper to read while waiting for the food. There on the front page of the paper, the headlines declared that the rare duck had been found dead. Despite missing their target bird, Judy and Bill birded a bit before going home — with little luck. Judy said there was no avian activity because all the birds were at the funeral. I think it was nice that the other birds respected their eiders. 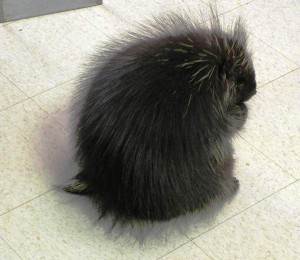 Al Batt took this photo of Charlie the porcupine.

I visited Medicine River Wildlife Centre, or MRWC, located near the hamlet of Raven in central Alberta. Each year, wild animals are injured, orphaned or compromised. Many of these animals are rescued, treated and released back into their natural habitat thanks to facilities like the MRWC, a wildlife hospital and environmental education center dedicated to assisting distressed wild animals. Through an extensive network of volunteer drivers and first aid stations, wild patients arrive from around Alberta.

The MRWC produced a children’s book, Otis’s Story, written by MRWC’s education owl, Otis. I provided a bit of the voice for Otis, a great horned owl. The great horned owl is the provincial bird of Alberta.

Alberta has no Norway (brown) rats, but they have woodrats. I enjoyed seeing a bushy-tailed woodrat that had been found under the hood of a car returned from a trip to the mountains. The woodrat is a cute critter known as a packrat in stories told around the fire. It steals shiny objects from campsites. If it finds something it wants, it drops what it is carrying and “trades” it for the new item. This inspired an anecdote about a man’s dime being replaced by two nickels. A woodrat picks up curious objects it finds and packs them home to its den, where bits of rock or wood, bones or shiny objects add to the den’s strength.

I petted a porcupine named Charlie at the MRWC. When you pet a porcupine, you pet in only one direction. A porcupine’s body, with the exception of the belly and legs, is covered with 30,000 sharp quills. Porcupines cannot throw these quills.

Bobbi Forster of Hollandale writes, “We have a pair of cardinals and the female is attacking the window. Isn’t this spring behavior? She has been doing this for about a week now and I thought this was something they did when they were establishing territory for breeding. Are they confused, is this normal, or is this something to do with global warming?” Female cardinals do not defend territories as vigorously as males, yet one female attacked a window each day for six months. This defense of territorial boundaries should decline as autumn ages, but this female apparently has some issues. She sees her image as another female that needs to be driven off. This behavior is common in spring and early summer, so maybe she is doing it now to avoid the crowds.

“The best way to pay for a lovely moment is to enjoy it.” — Richard Bach

“The universe is full of magical things, patiently waiting for our wits to grow sharper.” — Eden Phillpotts