You don’t have to travel far to discover new things

“Everything is nearly copacetic. I’m looking to buy a business. I found one that would be perfect for me, but there’s some good news and there’s some bad news. The good news is that they want only $1 million for it.”

“They want $500 down. I had lunch with one of our old teachers. His favorite thing to say to a student was, ‘When you talk to me, shut up.’ He used to go by the name of John, but since he retired, he shortened it to Jack. He won’t eat with anyone who doesn’t know the Heimlich maneuver. I went ice fishing with Jack last winter. I wasn’t having any luck, while Jack was pulling fish after fish out of the hole in the ice. I finally asked Jack what his secret was. Jack looked me right in the eyes and said, ‘Mmmmm mmm mm mmm mmmm mmm mmm.’ I didn’t understand a word he said. I asked Jack what he’d said. He replied, ‘Mmmmm mmm mm mmm mmmm mmm mmm.’ I told him that I still didn’t understand him. Jack spit something into his hand and you’ll never guess what he said.”

“He said very clearly, ‘You’ve got to keep your worms warm.’”

Great distance is not necessary to travel. Exploration and discovery are made possible by seeing things through new eyes. These could be done in a backyard or through a window. Abraham Heschel said, “The beginning of our happiness lies in the understanding that life without wonder is not worth living.” Who knows, maybe each time we delight in the wonder of nature, an angel gets his wings.

Larry Peterson of Wells saw a common grackle in his yard that demonstrated leucism by having a white head. Leucism is a condition that affects birds’ feathers and turns them pale or white. Larry told me that he used to find the presence of the grackles in his yard frustrating as they tended to rule the roost, but he has found it helps if he thinks of each grackle being called the North American iridescence instead of a common grackle. Larry admits that grackles are not the best of singers, but he doesn’t value his friends according to their ability to sing.

Birders talk about a spark bird. That’s a bird that someone sees or hears that sparks an interest in birding. A birder from Chicago said that when he was a boy, he saw dandelions fly. In reality, they were goldfinches flying into the air after feeding on the seeds of the dandelions. By the time he learned that, he was hooked.

A caller asked what impact Hurricane Sandy had on birds. Many birds are killed by hurricanes, especially seabirds that are unable to seek shelter from storms. Birds caught in storms are blown off course, often landing in inhospitable places or becoming too battered and weak to survive. Others, while not killed or displaced by storms, may starve to death because they are unable to forage in poor weather. Hundreds of thousands of birds may die as a result of a major hurricane. Hurricanes can have severe impacts on endangered species. Hurricane Hugo (1989) killed half the wild Puerto Rican parrots in existence. The Cozumel thrasher, found only on Mexico’s Cozumel Island, was pushed to the edge of extinction by Hurricane Gilbert (1988). Hurricane Iniki (1992) may have wiped out the remnants of as many as three bird species when it hit Hawaii. Hurricanes can have detrimental effects on bird habitats. Cavity-nesting species can be especially hard hit when the trees in which they nest are blown down. 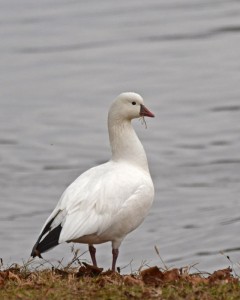 Darcy Sime, of Alden, snapped this photo of Ross’s goose.

“What animal lives the longest?” It is likely a turtle. The longest life of any tortoise of that there is an authenticated record is that of Marion’s Tortoise. It was taken as an adult from its native island in the Seychelles to Mauritius by the French explorer Marion de Fresne in 1766. It lived there for 152 years, dying in 1918. Since it was an adult at the time of its capture, its actual age was estimated at 180 years and perhaps as much as 200 years.

“I drove many miles with a lady beetle clinging to my car’s windshield. How could it do that?” The pads on its feet create surface tension. It would be akin to placing wet paper on a table. If the paper were dry, it would be easy to lift, but the wet paper clings to the table.

A male ruby-throated hummingbird typically weighs between 2.5 and 3.5 grams, while females tip the scales at 3.5 to 4.5 grams. A nickel weighs 5 grams.

The snowy owl, about the size of a great horned owl but heavier, will attack a polar bear that gets too close to its nest.

Sea otters have very thick fur — 850,000 to 1 million hairs per square inch. They have the thickest fur of any mammal. I wonder who counted those hairs?

There are an estimated 1,100 species of bats worldwide, accounting for about 20 percent of all mammal species.

Authorities at an airport near Gloucester, England, in an effort to keep birds away from their runway, are blasting out Tina Turner’s hits at a high-volume. Gloucestershire Airport officials say that gulls and crows are the biggest problems.

A rock wren feeds mainly on insects, larvae, spiders and earthworms. It doesn’t drink water. Its food provides all it needs. Captive rock wrens wouldn’t drink water when it was offered to them.

An interesting study that was published in Nature years ago found that peregrine falcons are less likely to catch pigeons with the so-called “wild” plumage, characterized by a white rump, than pigeons of other plumage types. The white rump appeared to be what saved them.

“Enjoy the little things, for one day you may look back and realize they were the big things.” — Robert Brault

“We can throw stones, complain about them, stumble on them, climb over them, or build with them.” — William Arthur Ward