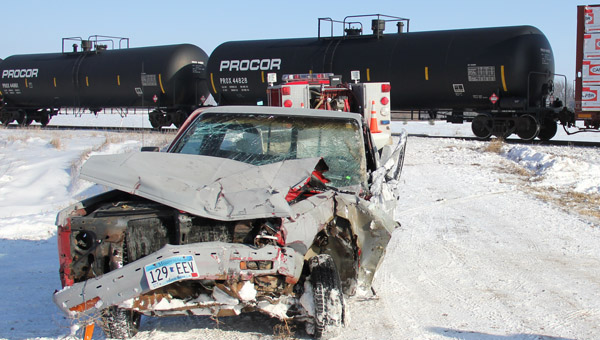 A GMC Sonoma pickup is about to be towed after a train vs. truck crash Saturday afternoon north of Clarks Grove. -- Kelli Lageson/Albert Lea Tribune

CLARKS GROVE — A man sustained serious injuries after his truck collided with a train Saturday afternoon.

Authorities said the man was breathing and alert but was transported to Mayo Clinic Health System in Albert Lea by ambulance. Officials identified the man as 43-year-old David Martin Christensen, of Ellendale.

Christensen was the sole occupant in a gray 1991 GMC Sonoma. The pickup was traveling eastbound on 775th Avenue, a gravel road a few miles north of Clarks Grove, when it crashed into a southbound Union Pacific train around 12:15 p.m. Saturday.

Both Clarks Grove and Geneva fire departments responded. Ambulance crews from Ellendale and from Albert Lea responded, as well as the Freeborn County Sheriff’s Office and Minnesota State Patrol.