Raccoons remain active when temps are above 27

“Everything is nearly copacetic. I went through the 10 items or less checkout line at Bacon World. It’s the only line I could afford. It wore me out enough that I fell asleep in front of my TV. I don’t mind falling asleep in front of a TV. I know I’m not missing anything. I visited Rummy’s place yesterday. He’s contrary. He won’t talk until someone asks a question he can answer with a “no.” He’s taken up building sailing ships inside whiskey bottles. I think he’s more interested in getting the whiskey out than he is in getting the ship in. His house is filled with mounted animals. He isn’t a hunter. He’s just a bad driver. He still has every baseball card he’s ever owned. Ma threw mine out. Ma even threw my accordion out by mistake — at least nine times. She recycled the certificate that showed I’d gone on a bungee jump.”

“What did you think of bungee jumping?” I say.

“I thought, ‘This will be the last time I ever do this.’ Seeing the ancient artifacts at Rummy’s sparked my interest in genealogy. I’m tracing my family’s history.”

“Isn’t anyone else in your family doing that?” I ask.

“No, and the police have given up looking for most of my relatives.”

It was examining roadkill — an opossum that was no longer playing opossum. Opossums are nature’s speed bumps. Wild eyes looked in my direction. The animal ran off to places only coyotes know.

I saw evidence of raccoon activity. A bird feeder had been demolished. As long as the temperatures of most days remain above 27 degrees, raccoons are active. Once the weather turns too cold for them, they sleep in sheltered dens such as those found in hollow trees. They might stay there until January or February.

I spotted a deer. The rutting season for the white-tailed deer peaks during the last two weeks of November.

In the company of eagles

I never tire of the company of eagles. I visit Haines, Alaska, each year and hang out with bald eagles. How important is our national bird? We carry it in our pockets — on quarters, half dollars and dollar bills. Once upon a time in Alaska, the bald eagle was a bird that some folks enjoyed seeing only on money. Until 1953, Alaska had a bounty on eagles. 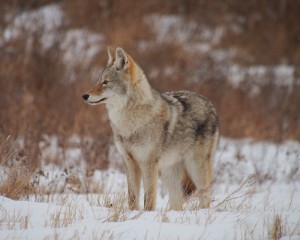 Myrne Pearman, of Red Deer, Alberta, Canada, took this photo of a coyote.

Bald eagles nest on the Aleutians Islands. Due to the absence of trees on those volcanic islands, the eagles nest on cliffs, pinnacles and the ground. Fox farms were once abundant in Alaska. In 1930, there were more than 600 registered fur farms and many unregistered ones. The farms were mostly on remote islands, where foxes were free-roaming fur-bearers. Most farms went out of business during World War II because of the popularity of synthetics.

Jim Heaton told me that there was a fellow in Haines who walked around town feeding bread to the northwestern crows there. Jim said that one day, a young couple visiting Haines bought a loaf of bread at a grocery store. As the pair walked down the street with their loaf of bread, they were made uncomfortable by a large following of crows. The birds didn’t follow as far as a crow flies, but it was close. I saw ravens gathering outside the McDonald’s in Juneau. Some people call them cravens, saving the time needed to learn the difference between crows and ravens.

Karen Daniels of Williamsport, Pa., told me she was 13 years old when she went on her first tour boat on a large body of water. The water was rough and everyone got sick except Karen. She said that she would have laughed at the others if a gull hadn’t pooped on her head.

Mary Lou King of Juneau cared for injured birds. She loved all the birds she rehabilitated except one. That one was a great horned owl with the nastiest disposition. When the owl recovered, Mary Lou placed it and it’s cage into the car, and accompanied by her young children, she drove to a release spot. Somehow, the owl got loose in the car. Mary Lou braked, parked the car and opened all the doors. The kids escaped without harm, as did the owl.

Paul Schwab of Owatonna writes about a hawk looking for a meal and becoming a meal, “A hawk flew by our feeders, scattering birds. Unfortunately, one hit the window. I thought I’d go out and put it in the recovery bag. The hawk came back, picked it up, and flew away. I think it was a goldfinch and a sharp-shinned hawk. The next morning, I looked out and a Cooper’s hawk (juvenile, the eyes were yellow) had captured a sizable victim. Got the binoculars and it had taken a sharp-shinned hawk. It could not fly away with it. It plucked away feathers and began feeding on it. In three more attempts to fly, it only covered 30 feet. Finally, the Cooper’s hawk did get the sharp-shinned hawk airborne. Do they come back and eat more of a large prey or not? Or do they just leave when full and kill again when hungry?” The answer is yes to both questions. It depends upon the hawk and its needs.

Harold Williams is retired from Auburn and raises peppers. He has watched deer pull the plants up by the roots and eat them. He said that the heat of the peppers had no impact on the animals.

“The best years of your life are the ones in which you decide your problems are your own. You do not blame them on your mother, the ecology or the president. You realize that you control your own destiny.” — Albert Ellis

“Gratitude unlocks the fullness of life. It turns what we have into enough, and more. It turns denial into acceptance, chaos to order, confusion to clarity. It can turn a meal into a feast, a house into a home, a stranger into a friend. Gratitude makes sense of our past, brings peace for today and creates a vision for tomorrow.” — Melody Beattie