“Everything is nearly copacetic. The constant racket garbage collectors woke me early and my favorite song has become a jingle for a hemorrhoid commercial, but other than those, things are good. Last year was almost mediocre.” 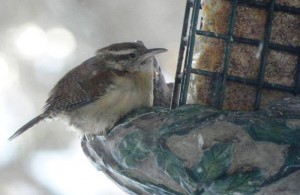 A photo of a Carolina wren at Jim and JoAnn Malepsy's home in Albert Lea. --Submitted

“There is a sadness to never being satisfied,” I add.

“Oh, thank you, Dr. Phil. Still Bill has found a way to overcome adversity. He hasn’t been cursed with any ambition, but he doesn’t suffer from laziness. He enjoys it. Still Bill never sees a sunrise. He waits until the sun gets to the side of the house where his bed is located before he gets a glimpse of it. Like everyone in his family, he has more fingers than teeth. One day, his Ford wouldn’t focus, so Still Bill put his false teeth in the dishwasher. You should see his smile now. It’s so white, he’s going to be on TV during Shark Week. My neighbor, Music Munson, named because of his mastery of the flutophone in grade school, has dogs that won’t stay home. He has so many of the mutts that he can’t get an accurate count. They like hanging around Bill Johnson’s place, the other Bill Johnson’s farm, and near Bill Olson’s house. The Bills are alive with the hounds of Music.”

I peered out my window to the world. A flock of house sparrows blew into a cedar, like winter hitting Minnesota. They turned the tree into a house of sparrows. The sparrows had been absent from the yard, but like deer, had herded up. As they took flight from the ground, there were so many tiny wings that they produced a whooshing sound.

The house sparrow was introduced into Brooklyn, N.Y., in 1851. By 1900, the birds had spread to the Rocky Mountains. Two more introductions were made in the early 1870s, in San Francisco and Salt Lake City. The reasons given for the introductions were to establish wildlife familiar to European immigrants and/or to control insect infestations. House sparrows are common across North America except in Alaska and northernmost Canada. House sparrows hop instead of walking and have a pecking order much as chickens do. The males with larger patches of black on throats and breasts tend to be older and dominant over males with less black.

Even though house sparrows are cherished in the U.K., they win few popularity contests in this country. I find comfort in their irrepressible chirping during the winter. Their sounds bring to mind the time when we kept chickens. They were free-range chickens, but we locked them in the henhouse for safekeeping over the winter. When the henhouse door was opened for the first time in the spring, there was a joy evident to all who saw the fowl. Sparrows exhibit that joy all year long. Like it or not, when a house sparrow sings a tune, every day is in the month of June.

The World Meteorological Organization declares that the highest recorded surface temperature was 134 degrees Fahrenheit measured on July 10, 1913, at Death Valley.

Birds living in urban environments often use cigarette butts to line their nests. Unlike in humans, the cigarettes have a beneficial effect — they reduce the number of parasites in the nests. Scientists believe that it’s possible the nest protection was a happy coincidence. Birds might line their nests with discarded butts because they provide good insulation.

Apparently, the New Orleans Hornets basketball team plans to change its name to the Pelicans next season. Louisiana is the Pelican state and the brown pelican is the state bird.

Eagles hanging out with a bad element

Dr. Pat Redig of The Raptor Center at the University of Minnesota spoke at the Minnesota Ornithologists’ Union’s paper session. His talk was on bald eagles and lead poisoning. Redig recommended a ban on lead shot because, among other reasons, of its impact on bald eagles. Eagles are fond of feeding on deer carcasses. Lead the size of an aspirin in such a deer is all that it takes to poison an eagle. Lead in any form is toxic. Ben Franklin wrote of the “mischievous effects” of lead back in 1786. Redig believes that nontoxic shot has better ballistics and knockdown power than lead shot. Redig emphasized that this is not a gun rights issue.

“What kind of duck is Daffy Duck?” Daffy Duck is the kind of waterfowl who says things like, “I’m not afraid of ghosts. In fact, I’m not afraid of anything. Except perhaps low quarterly profit projections and personal intimacy.” Daffy Duck is a Looney Tunes cartoon character created by Tex Avery for Warner Brothers. An argument could be made that Daffy was modeled after the black scoter, a ring-necked duck, a mallard or an American black duck. Daffy doesn’t match any of them well. Daffy appears to be a hybrid hunted by the likes of Elmer Fudd. I don’t know what kind of duck Donald Duck is either, even though Asteroid 12410 was named after him. I always wanted to try to borrow money from Donald’s uncle, Scrooge McDuck, who I suspect would have told me in a yell that would have made Al Pacino proud, “No!”

“What is a spatzie?” Spatzie or spotsie are names that some call the house sparrow. Others refer to it as the English sparrow.

The Festival of Owls

The Festival of Owls will be held in the southeastern Minnesota town of Houston on March 1-3. For more information on this remarkable celebration; 507-896-4668, nature@acegroup.cc or www.festivalofowls.com.

“The frog does not drink up the pond in which he lives.” — Native American proverb

“How can any child who is unfamiliar with the animals, birds, plants, insects, rocks, soils and water-powers of its own home neighborhood, develop into a progressive citizen with respect to the proper use of these resources?” — Alice Hall Walter