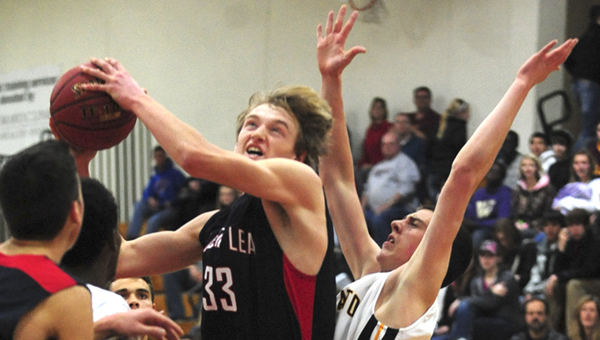 Vandenheuvel and See-Rockers combine for 52 points

The Tigers lit up the scoreboard first on a pair of 3-pointers from Tyler Vandenheuvel to give Albert Lea a quick 6-0 lead. However, Mankato East came alive and tied the score at eight. Fouls began to rack up for both sides — 17 (combined) in the first 10 minutes, and the Cougars took a 12-8 lead. The Tigers knotted the score at 18, but East used another run to take a three point lead into the break.

“We weren’t pleased with the first half,” Albert Lea head coach Lucas Kreuscher said. “There was just no rhythm to the game with the turnovers.”

The second half was a different story as the Tigers found their rhythm. Dylan See-Rockers began the period by scoring two of his 24 points with a steal and lay-up, which helped set the tone for the rest of the period. Albert Lea took a 32-29 lead with a 10-5 run to start the half, but the Cougars clawed their way back. East went on an 8-2 run to cut its deficit to one point, but the Tigers built the lead up to double digits with a large portion of Cody Scherff’s team-high 12 rebounds, and another basket from downtown by Vandenheuvel. Vandenheuvel led Albert Lea in scoring with 28 points.

A stingy defense was part of the difference in the second half, even when Kreuscher utilized his subs.

“We played nine guys, and I think you can point to each one of them and say they helped us in a significant way,” he said.

“I’m really proud of the guys,” Kreuscher said. “This will help us down the stretch. A lot of things weren’t going our way, but we kept fighting, and eventually we made plays on both ends of the court.”

Tyler Shaw drives to the basket against Mankato East.