From big kids to little children … 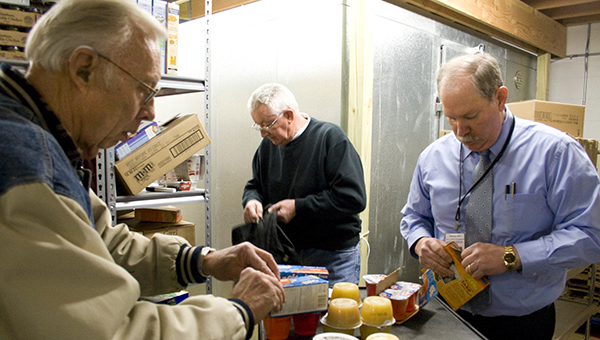 Several Albert Lea groups have stepped up in the last year to help reduce hunger for children at one elementary school.

Through the efforts of the Albert Lea Salvation Army, two local service clubs, the Freeborn County United Way and a social worker at Hawthorne Elementary School, backpacks of food are being sent home each weekend for 28 children in need. 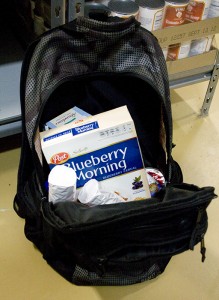 The backpacks each weekend contain enough food for two breakfast meals and two lunch meals for each child, plus snacks. Foods commonly placed in the bags are cereal, oatmeal, microwaveable soup packages, pudding and gelatin.

The weekend backpack food program originated about a year ago as community leaders brainstormed ideas on how to have a hunger-free Minnesota, said United Way Director Ann Austin.

At the same time, Daybreakers Kiwanis Club member Catherine Buboltz, a Tribune account executive, was meeting in a Community Education board meeting. She said it came up that some of the students in the Albert Lea School District could not afford to buy items from the healthy snack carts and that they had little if anything to eat over the weekend when they were not in school.

With similar backpack programs being successful in other communities, Austin suggested the idea to Buboltz, who began looking into the potential of it happening here. 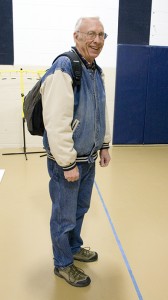 Rex Stotts, a retired truck driver and business owner, is
a member
of the
Daybreakers
Kiwanis Club.

Austin said the United Way’s role was basically to pull together all the entities for the project.

Through Buboltz’s efforts, the Daybreakers Kiwanis approved funding $1.75 per child per week and gained approval by Superintendent Mike Funk to pilot the project at one school. Volunteers from both Daybreakers and Golden KI Kiwanis load the backpacks each week at the Albert Lea Salvation Army, and Katie Nielsen, social worker with Hawthorne Elementary School, helped determine which families and children were to receive the backpacks.

She said at the beginning of the school year, there were many families at Hawthorne who had trouble paying their lunch bills even when they were already on a reduced-price schedule. There were also kids in classrooms who were always hungry, and teachers were providing snacks for many of the kids. 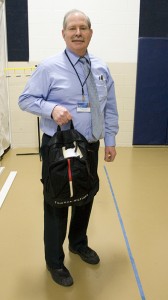 Mark Fenstermacher works for Mayo Clinic Health System and is a member of the Daybreakers Kiwanis Club.

She talked with some of the families and others who contacted her for help, and they were grateful and excited to be a part.

“Most kids have backpacks, so it’s nothing unusual to see a kid with a backpack,” Nielsen said.

How does the program work?

Every week, usually on Thursdays, volunteers with the Daybreakers Kiwanis or Golden KI Kiwanis go to the Salvation Army to load food into the backpacks and then take them to Hawthorne for distribution on Friday.

The bags, which are all different, are numbered for the family to which they will be given. The volunteers are given a list of how many and what items to include.

Buboltz said the members of the clubs have been positive about the program and have loaded the backpacks dozens of times.

The program began in February 2012 and then restarted at the beginning of the 2012-13 school year.

“The kids are very appreciative of the food,” Nielsen said. “I’m really grateful that the Kiwanis Club keeps funding it.” 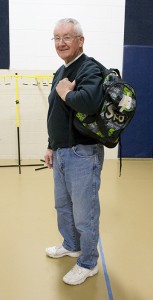 Phil Hintermeister is retired from the field of computer technology and is a member of the Daybreakers Kiwanis Club.

What goes in each bag?

Moffitt said each bookbag provides enough for two breakfast and two lunch meals for each child, along with snacks.

That could include a box of cereal or a couple packets of oatmeal for breakfast and possibly some microwave soup meals for the lunch meals. It might also include a jar of peanut butter and some applesauce.

Moffitt said her goal is to give food that is easy to prepare, so if parents are working on the weekends, they don’t have to worry about making complicated meals.

“This is something small that we can do with relatively minimal effort,” she said.

After the backpacks go home to the students, they bring the empty bags back to school by Wednesday of each week, and the process begins again.

Could other schools in the district benefit?

Buboltz said if there are other service clubs or churches who want to get involved through volunteering or donations, the program may be able to expand to other schools.

In addition to the backpack program, Austin said community leaders continue to talk about other ways hunger can be addressed in the community.

“It’s not just about eating enough,” she said. “It’s about getting proper nutrition.”

For more information about the backpack program, contact Buboltz at 377-0835 or dbkiwanis@gmail.com.