Quietly, one group of people has led several health initiatives

A children’s book that encourages healthy activity. Support for the farmers market. A study on bike routes.

Was this due to the Blue Zones? Or maybe the Statewide Health Improvement Program?

Nope. Those are some of the initiatives Pioneering Healthier Communities has funded in the Freeborn County area since 2009.

Though the $60,000 has been distributed through the Albert Lea Family Y, it has gone to support at least 10 health initiatives throughout the community — including other health and wellness projects supported by the Statewide Health Improvement Program and the AARP/Blue Zones Vitality Project.

“We kind of had the perfect storm with having all of those available at the same time,” Dieser said.

Ann Austin, Freeborn County United Way executive director and co-coach of the local program’s efforts, said the grant funding has brought people together who have a common interest in creating a healthy environment.

“I think it’s really benefited our farmers market. It’s benefited our school district, and it’s brought everyone together,” Austin said. “It’s been amazing what our community has been able to accomplish in the last four years.”

Here is what the funding has supported:

Some of the first funding Pioneering Healthier Communities gave was to purchase two commercial-grade refrigerators for Hawthorne and Sibley elementary schools.

The refrigerators allow the schools to keep healthy snack options for students that are given out each day.

The organization partnered with the Statewide Health Improvement Project, which funded the carts for the snacks.

Foods such as apples, string cheese, pretzels and Goldfish are offered.

Dieser said members of the community have donated to the program as well to make sure all kids can afford healthy snacks.

One of the primary focuses of the local Pioneering Healthier Communities group has been to increase opportunities for extracurricular activity and encourage other modes of transportation. 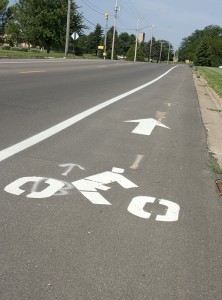 “It’s a good thing to be able to get around by walking and biking,” Dieser said.

So when the idea for bike lanes on Front Street came forward, the group joined in to show their support.

Dieser and others attended Albert Lea City Council meetings and other city meetings to encourage sidewalks and safety for bicyclists and pedestrians.

The lanes, which go on Front Street from U.S. Highway 69 to Frank Avenue, were ultimately approved in November 2010.

Pioneering Healthier Communities was one of three entities to contribute money for the project. The money donated covered two or three years of paint re-striping.

“It’s fun to drive down Front Street and see people riding their bikes,” he said. “For the most part people are using it correctly.”

Officials have said the bike lanes are slowing down motorists on the street, reducing semi traffic and increasing safety for bicyclists and pedestrians.

At about the same time the Front Street bike lanes were implemented, several groups came together to sponsor the community’s first Family Bike Safety Rodeo. 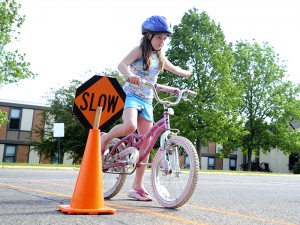 The rodeo, which was free for children and adults, featured different stations designed to help kids learn the rules of the road, how to handle a bike and how to properly wear a helmet. Free helmets were also handed out.

Dieser said Pioneering Healthier Communities funding supported advertising for the event. The event, at Southwest Middle School, has been offered in 2011 and 2012.

The Healthy Freeborn County website was created as a communitywide effort with multiple partners, including schools, worksites, health care providers and community organizations.

Every elementary school student in Albert Lea received a coloring and activity book titled “The Healthy Adventures of Al, Bert and Lea.”

The book aims to educate children about health and wellness.

It includes a story about three boys who begin their summer vacation by taking part in several recreational opportunities in the city. It also has word searches and puzzles.

The Pioneering Healthier Communities group started the book in 2010 and finished it in 2011. 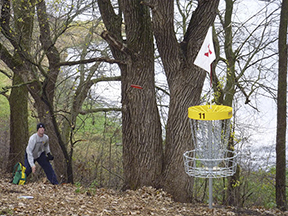 The project took out the nine-hole disc golf course on the upper end of Bancroft Bay Park and replaced it with an 18-hole, tournament-quality course. Many local disc golfers provided the labor and raised funds for equipment and tee pads.

He said the Pioneering Healthier Communities did not have a part in choosing the location for the course. That was determined by the Albert Lea Parks and Advisory Board, based on the fact the smaller course already existed there and at the request of course designer Ross Brandt.

Sponsorship for Know your Growers: $2,500

This donation, used for advertising, encouraged people to get more connected to local farmers in the community and the different produce they grow. The advertising was put out through the Local Food Producers Market Association.

Austin said there are several unique items grown locally that many people don’t know about. By promoting local farmers, it can help sustain these efforts.

“Having local produce is important,” she said. 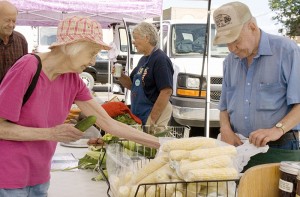 The market in 2011 brought in a scanning machine equipped to handle credit and debit cards, Supplemental Nutrition Assistance Program vouchers and EBT transactions.

When a card is scanned, people are given wooden tokens to use to purchase items. People can get cash back when using credit or debit card tokens but not when using EBT tokens.

The local committee has set aside this funding to support a Freeborn County-wide comprehensive plan study about shared user paths.

Committee member Lynn Scheevel said there is a part in Albert Lea’s comprehensive plan dealing with nonmotorized transportation, but there is not one for the entire county.

The study would look at existing bike lanes and shared user paths as well as areas where there could be better connections or expansions.

“What’s the bigger vision in the county?” said Scheevel, who has been on the committee for two years. “How do we tie in biking and shared user paths county wide, not just in the city limits?

The community gardens at Halverson Elementary School were a collaboration between multiple entities. They aim to help children and families connect with the source of their food and to provide educational tools for educators on nutrition.

The plots have been used by Halverson students and their families.

Dieser said the Pioneering Healthier Communities committee is working diligently to make sure the remaining money is used wisely.

There is not a deadline for when the funds have to be used by, and the group continues to meet once a month, now under the umbrella of the Vitality Center.