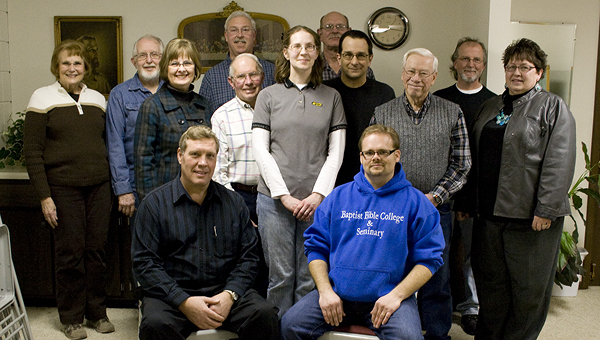 But starting last year, in a decision that they say was led by God, Calvary Baptist Church and First Baptist Church joined ministries and are now sharing pastors.

“I believe the Scripture is very clear and plain that Christ wants members of his body to be unified and one in purpose,” said Clayton Balsley, senior pastor at both churches. “It’s not about First Baptist Church, and it’s not about Calvary Baptist Church. It’s about building the kingdom of God.” 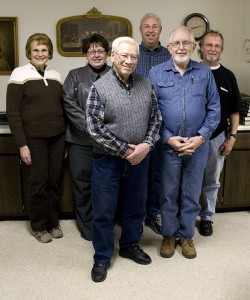 Members of Calvary Baptist Church are from back left are Janet Poeschl, Kay Werner, Dave Thunstedt and Bruce Himmerich. In front from left are Louis Henderson and Doug Jensen.

While the church congregations meet together each Wednesday night for youth groups and Bible study classes and occasionally combine services, they are still under two separate roofs on Sundays.

“I feel like we’re going in the right direction,” said Mark Miller, associate pastor at both churches. “I believe if it’s God’s will, this will all work out, and I believe it is God’s will because of the way it has been working.”

In December 2011, Calvary Baptist Church’s senior pastor, Bob Weniger, left Albert Lea to serve at a church in another community. 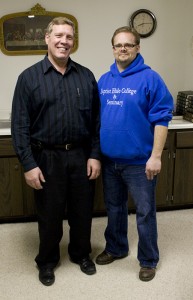 Doug Jensen, who was chairman of the church’s deacon board at the time, said the church leadership began looking at different options for replacing Weniger.

“We started praying about it, and we really came to the conclusion that God wants us to take this step forward,” said Miller, who has been at Calvary for eight years. “We looked at it as an opportunity to join forces and come together.”

It would be a big change for the church, which has been in existence since 1872 and in its current building on Bridge Avenue just south of Hammer Road since 1974.

Jensen said he met with Balsley to talk with him about the idea, and after more prayer, Balsley met with a series of boards at Calvary Baptist Church.

Then came a meeting between the leadership of the two churches to work out the details, and Balsley came to Calvary to preach and answer questions.

Both churches voted favorably for the merger.

“I believe that the Lord is doing something here,” Jensen said. “It’s a difficult thing to put two churches together, to work together and try and do some things for the Lord, but I really sense and believe he’s going to do mighty things.”

The two churches met in a joint worship service under the combined ministry on July 1, 2012, and the various leadership boards are starting to meet to get to know each other better.

Though they don’t know where the merging ministries will take them, they said they feel optimistic about the direction they are taking.

“We’re working toward the fact that we want to get together and talk about what each church does and get rid of some of the duplication,” Jensen said.

Though both pastors are busier than they were previously, the merging ministries has brought the two churches closer together, said Dave Thunstedt, who lives in Alden.

“We’re really one church but working together at two buildings,” said Thunstedt, who has been attending the church since 1957. “In the future, I hope we actually may be at one facility. We’ll see where God leads us and how people feel as we do more ministry.”
First Baptist Church

Balsley had served as pastor for First Baptist Church for 13 1/2 years when he was approached by Jensen about the possibilities of Calvary and First Baptist joining ministries. 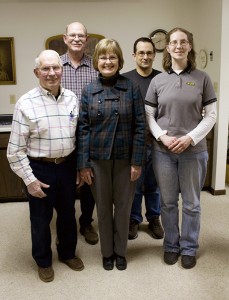 First Baptist Church members from back left are Mike Nelson and Dustin Petersen. In front from left are Marvin Miller, Miriam White and Sheila Petersen.

At that time, Calvary and First Baptist churches had done a few things together, but not much, Balsley said.

First Baptist had been in existence since September of 1866 and in its current building on Clark Street since 1910.

He said there were a few people from both congregations who knew each other and some were even relatives.

“It’s doubtful either one of us knew at the time where God would lead us in that adventure,” Balsley writes in his pastor’s letter in January. “To be honest, though I believe without a doubt that Jesus desires unity among the members of his body, I was skeptical that anything would develop beyond our initial conversation. Obviously God had other plans in mind.”

He said he believes since that meeting with Jensen — and through much prayer — that God has brought the churches together. Finances did not play into the decision.

He said the churches are having occasional worship services, youth programs, Bible studies, events, mission opportunities and outreach opportunities together.

“We are all a part of the family of God,” he said. “This has given us the opportunity to get to know our brothers and sisters in Christ. It is our prayer that we will support and encourage each other as we do the Lord’s work.”

Both churches are affiliated with American Baptist Churches.

Services begin at 9 a.m. Sundays at Calvary Baptist Church with Sunday school to follow at 10:30 a.m.