Andy Dyrdal has witnessed the changes in Albert Lea through the years. He turns 90 in April. He was born south of Lerdal and moved to the city at age 14. He recalls those cherished pre-World War II days when the downtown had three hotels, three ice cream shops and a dance hall called The Casino.

There have been many changes since then, and Dyrdal took me to five places he wished to share with Tribune readers. 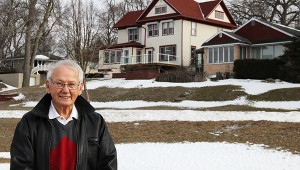 Andy Dyrdal stands in front of the home near City Beach that he resided in for 40 years. He now lives at Village Cooperative, 2201 Stevens St.

Dyrdal lived in a house overlooking City Beach for 40 years. The house, 715 North Shore Drive, now is owned by Tom Dyrdal, one of his two sons. Andrew Dyrdal, a widower, resides at Village Cooperate and enjoys boasting about how good it is there, calling it Lazy Man’s Living.

The elder Dyrdal, whose career was as a letter carrier with the U.S. Postal Service, bought the house in 1967, he said, after living for 13 years in a house on Fourth Street. Day in and day out, he and his family saw activities at the beach.

The biggest change is the tennis courts are now a skate park. He said he and other players would stop between games and take a quick swim to cool off, then resume play. Wind off the lake made games unpredictable some days. People parked on what now is beach because houses existed where the current parking lot exists. In the 1940s, people at City Beach would look across Fountain Lake and see what’s going on at The Casino, a dance hall built on wooden piles keeping it above the water. It had boat rentals, too.

People swam at Shoreland Beach, too, which was near the Shoreland Heights residential development. Back then, only a few of the older homes existed. And people swam at College Dock, which was down the hill along Abbott Street, near where Lakeview Elementary School exists today.

He recalls lines of people outside the Broadway Theater and snaking down the College Street side the building, on the northwest corner. People tended to call the movies “shows” back in those days. (People nowadays relate “shows” to television these days.) Shows were at 7 and 9 p.m. and Sunday nights were big. Thursday nights were bank nights, when the theater staff drew names to give away cash. The building, 340 S. Broadway, still exists. 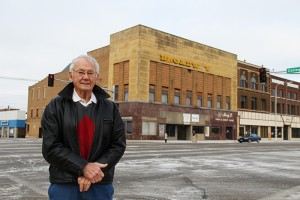 Dyrdal stands at the corner of College Street and Broadway in front of the Broadway Theater. He said lines for blockbuster movies would reach down College Street toward what is now the Aragon Bar, which in the 1940s was an auto repair garage.

Across the street, on the northeast corner, was the five-story Hotel Albert, torn down in the mid-1970s to make room for the new location of Freeborn National Bank. The location is now US Bank. Dyrdal was a bellhop at the Hotel Albert in the summer of 1941. He said the place touted itself as the largest hotel in the country for the size of city in which it was located. Yet in 1941 it managed to be filled three nights a week. Dyrdal left to go work for Lockheed Martin in California.

On the southwest corner was the Albert Lea Tribune. Carriers went downstairs from the outside to get their papers. Routes were so much in demand that people had to inherit them, and Dyrdal substituted for a friend, usually on Fridays, which took longer because it was the collection day.

One building down from the Trib was Western Union. Its workers would take bicycles to deliver messages. College Street also had Stieler’s Cafe and Burnsmoor Dairy, and across Washington Avenue was the Methodist Church, where an apartment building now exists.

Of course, on the southeast corner then as now was the Freeborn County Courthouse, which back then had a bell tower with a clock and stood without the eastern addition, built in 2003 and 2004. The jail existed where the parking lot is now. America hadn’t entered World War II; obviously, where the Freeborn County Veterans Memorial is today was just courthouse lawn. A brick in the memorial has Dyrdal’s name. He served in the Air Force during World War II.

Dyrdal has played golf since he was 16 years old. Last summer, at the 18-hole Rice Lake Country Club south of Lake Mills, he scored an 89 twice. In other words, he golfed his age.

Dyrdal recalls playing a nine-hole course with sandy greens and tees north the Wedge property. It was named the Recreation Golf Course and was built in 1932. With many young men gone during World War II, it was plowed under to become farmland, he said. 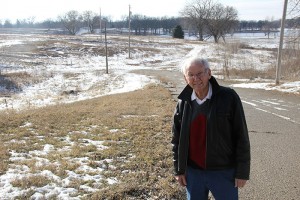 Dyrdal stands at the entrance to the Albert Lea Country Club, which offered a view of Edgewater Bay. He said the clubhouse was a place many locals miss.

After the war, many people played golf at the nine-hole private course called the Albert Lea Country Club. It had hills and overlooked Edgewater Bay. Dyrdal, who exited the Air Force in 1945, was a member of the club in 1946, ’47, ’48 and ’49. He enjoyed the course and recalled the hook down by the lake that Hole 7 had.

Gambling was popular in the spacious clubhouse. It even had slot machines. That came to an end in 1947 when Gov. Luther Youngdahl — “the Sunday school governor” — convinced the Legislature to outlaw slot machines and eventually many other forms of gambling.

The Recreation Golf Course was easier and flatter than the Albert Lea Country Club, Dyrdal said. The country club’s back nine was added years later. He said many people miss the course and have many memories of events and ceremonies at the clubhouse. He dislikes seeing the old course left to grow over. It closed in 2006 when a developer bought it and sought to turn it into a residential development, but his plan failed when legal battles with contractors arose.

For years the Albert Lea Parks and Recreation Department would flood the surface of the ice on Fuller’s Bay with water to create smooth skating ice and erect sideboards to create a rink. Kids would come from all over the city to figure skate or play pond hockey. 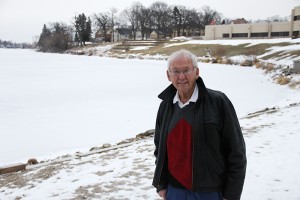 Dyrdal stands in front of Fuller’s Bay, a place often reached by going to the end of Mariner Lane off of Park Avenue.

On the farm his family had south of Lerdal, he wore clamp skates and learned to skate on a pond. He even went to the Hoidal School in Riceland Township. When they moved to town, he made new friends. He got shoe skates and learned of Fuller’s Bay, which today is best spotted in front of Mayo Clinic Health System and up along the Park Avenue Peninsula.

He said the hospital didn’t front the lake in those days. Houses did. Kids who weren’t skating would sled or ski down the hills in front of the homes and out onto the ice.

The city would stake lights around the skating rink and provide a warming house on the ice with a pot-belly stove inside.

The place was protected fairly well from the winter winds, he said.

Back in the 1950s and early 1960s, trucks would take people’s garbage to a dump right at the end of the road that now runs through Frank Hall Park, where the former wastewater treatment plant and an animal shelter now exists. People would could look down at the dump from Academy Park. Motorists would see the dump when they reached the end of Fourth or Third streets. 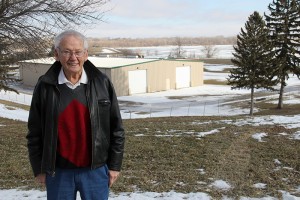 Dyrdal stands on a hill at the end of Fourth Street with city storage buildings behind him. The land below in the 1950s was a dump, easily seen from Frank Hall Drive.

Dyrdal lived on Fourth Street from 1952 to 1965. He said the neighborhood near the dump is much better these days, with a nice view of Albert Lea Lake, playground equipment at Frank Hall Park and fishermen along the water in cold and warm months.

He said Albert Lea has done a lot to beautify itself over the years, especially along waterfronts, whether it is the Brookside School area or Gasoline Alley or Fountain Lake Park, the city continues to be a wonderful place with cherished open spaces, such as lakes, ponds and grasslands.