Al Anderson at Ag Power Enterprises in Hollandale, a John Deere dealership, has seen fewer farmers doing the work that used to be done by many more farmers when he started working at the dealership in 1973. Updates to tractors and combines, as well as all the other ag machinery, have made it possible for people to do more in less time.

“Farmers who survived specialized in something,” Anderson said. 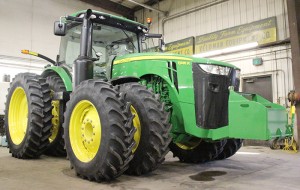 This tractor is a brand new John Deere 8335R. It has 335 horsepower. This tractor is outfitted with a rock box on the front, which are locally made in Emmons. –Kelli Lageson/Albert Lea Tribune

He remembers 38 operations, mostly vegetable farmers, in the Hollandale area when he came to the dealership. Now there are three. In the 1970s, having 500 acres was considered a lot. Now most crop farmers in Freeborn County manage 1,200 to 1,500 acres.

There are many more pieces of machinery available to farmers now, too. Anderson said in the ’70s there were a handful of tractors made by John Deere, and now the dealership offers 93 kinds of tractors, with various options.

“Everything just got bigger,” Anderson said.

And with that, the price increased.

So why the cost increase? Machinery now offers so much more innovation and convenience.

The big innovation in the 1970s was the enclosed cab, which offered farmers relief from dust and the option of heating and air conditioning. Nowadays, there are the changes a customer would expect, like increased horsepower and better fuel efficiency, but there’s also so much more technology available to farmers. Technicians and parts and sales employees have to take continuing John Deere education courses online just to keep up with all the new technology. 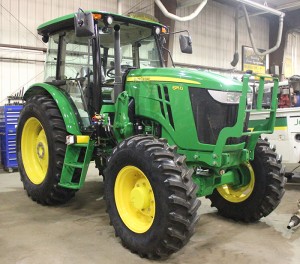 “We can help customers during planting season with fertilizer application,” Anderson said. “We can also monitor yields and moisture which helps them select corn varieties for the years to come.”

John Deere also offers a service called JDLink, which lets farmers and their local dealership monitor the piece of machinery from an iPhone or computer. The service will alert the farmer and the dealership if something goes wrong, like an alternator failing or if there is low oil pressure. Anderson said the dealership already has used the service to find out about issues, and then technicians found the machinery using GPS to get to the farm and fix it.

Another innovation Anderson is excited about is how some of the more advanced machinery can drive themselves. If a tractor or combine knows the GPS coordinates of the field, a farmer can sit in the cab with no hands on the wheel and the machine will steer itself. The classic image of a farmer on a tractor steering forward while looking backward is fading away.

Also, the combine can “call” a tractor via GPS to come alongside it pulling a grain cart so it can collect the crop, using technology John Deere calls implement sync. Anderson said while there’s still a person in the tractor for safety reasons, that the combine has complete control of driving the tractor.

“There’s a lot of innovation that a lot of people aren’t aware of,” Anderson said.