Car salesman: What is your favorite new car on the lot?

What is your favorite car? 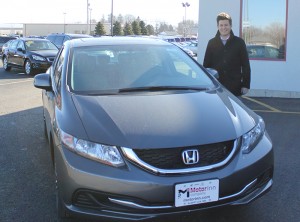 Jonathan Breuer, salesman at Motor Inn Company, stands with his favorite car on the lot: A Honda Civic. Breuer really likes the gas mileage with the Civic.

“Honda Civic. Because of the great gas mileage. Thirty-nine on the highway. And the great resale value.” 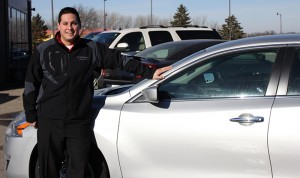 George Gonzalez, Nissan/VW new car manager at Dave Syverson Auto Center, poses next to his favorite car: a 2013 Nissan Altima. Gonzalez said he likes the new look of the car.

What is your favorite car?

“My favorite car would be a 2013 Nissan Altima.

“Yeah, love the look of it, and I love the fuel mileage on it.” 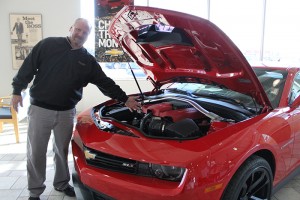 Mark Kness, sales associate at Vern Eide Chevrolet, takes a look under the hood of his favorite car at the dealership: A Chevy Camaro ZL1. He likes that it has the old ’60s muscle car look.

“This would have to be my favorite. It’s a Camaro. It’s a ZL1 which is the highest performance Camaro that they make. Super-charged with 575 horsepower. So it’s not something you buy to save gas.”

Why does this one stand out for you?

“Mostly the performance. But it’s got the muscle-car look. The Corvettes are really nice too, but this has kind of got the old ’60s muscle-car look. Kind of reminds me of the Transformers. Looks like it could come to life.

“So it’s got the same performance or even more than a Corvette, but it does have a backseat. So you can put four in there instead of just two.

“I normally like chrome myself a little more in the wheels, but these black wheels with the black stripes gives it a uniue look.

“I see a lot of cars come through here, but this is this one stands out. Nothing like I’ve ever seen. Got a 6-speed manual transmission. But the way the technology is, it’s so much smoother and easier shifting than it used to be back in the ’60s.”