The Christian school in Hollandale is getting some needed upgrades thanks to fundraisers and donations from alumni.

Hollandale Christian School Principal Lisa Vos said the school has only been in the building on Central Avenue since 1981, she guessed that it had been built in the 1960s. Because of that, she said the school needs some indoor upgrades. 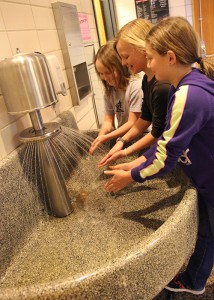 Hollandale Christian School third-graders, from left, Marlea Emberson, Gabrielle Ladlie and Kendra Smeby wash their hands before lunch. Principal Lisa Vos said she’d like to keep the basin sinks that are located outside the bathrooms because it’s convenient for children to walk by and wash their hands before lunch. –Kelli Lageson/Albert Lea Tribune

In the last 10 years the building has gotten a new heating system, all new outer doors and new windows. Vos said supportive alumni have helped school administration keep the building upgraded and efficient.

“I’m very pleased about the amount we’ve been able to raise,” Vos said.

There are two more large projects for the building. Vos said the school is in the process of replacing classroom flooring, and they have two of the seven classrooms done already. There’s also office rooms to upgrade.

It cost around $4,000 to redo the tiling in each classroom; each classroom is just over 800 square feet. That covers the cost of removing the tile, which is expensive when asbestos removal costs are added to the project. Vos said some tiles are buckling, and some have small pieces missing.

Vos said the school chose to again tile the classrooms because they’re easier to clean and can withstand more wear and tear of desks and chairs. Students also eat snacks in the rooms and complete messy art projects, so tile was a better choice than carpet for the school. Vos said the hallway flooring and gym floor are still in good shape and have been holding up well.

The other large project the school is fundraising for is to be able to upgrade its bathrooms. Right now there is one girls’ bathroom with three stalls and one boys’ bathroom with three stalls and four urinals. The bathrooms do have one special feature that Vos hopes can stay — an outer basin sink that allows more than one child to wash their hands at once. Vos said each student is required to wash their hands before lunch, so classes stop at those sinks before heading to the lunchroom. 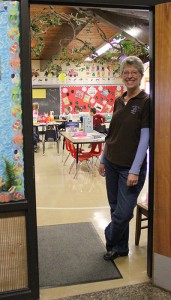 Hollandale Christian School Principal Lisa Vos poses for a photo in the kindergarten room, one of the classrooms that still needs its floor redone.

There is also a small, unisex bathroom that staff use in the building. The bathroom upgrades would focus on the two main bathrooms that students use each day and that visitors also use when events are held. There isn’t a handicap stall in either main bathroom, and Vos guessed that those would be added.

“We want to make sure we’re meeting the needs of the kids,” Vos said.

At the spring auction, on March 22, the school hopes to have much more information for the public on the bathroom upgrade project.