Firefighters on the hunt for equipment upgrades

The fire department in Geneva has again applied for a grant it hopes to receive to pay for new gear for its 24 firefighters.

Geneva Fire Chief Greg Bartsch said the department has applied for the Assistance to Firefighters Grant from the Federal Emergency Management Agency before, but they’re hopeful they’ll be named a recipient this year. 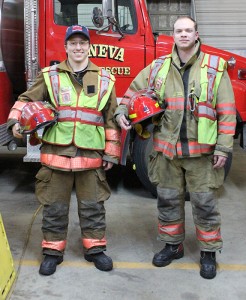 The fire department applied for a grant worth more than $90,000 to pay for 24 firefighter suits and eight airpacks. Airpacks are self-contained breathing apparatuses. They’ve slowly been updating the suits when they can, but most are at least 15 years old.

Bartsch said the department is lucky that they’ve had community support at fundraisers to help keep their other equipment updated. Their pumper truck is a relatively new 1999 Freightliner, and the tanker truck is a 2000 Freightliner.

The fire hall also houses a 1976 Dodge truck, given to the department by the Minnesota Department of Natural Resources, and a 2005 Ford F-150.

“All our trucks are in good shape,” Bartsch said.

Bartsch said many people probably don’t know that the fire hall also has an Ellendale ambulance. Bartsch said the department has three EMTs who are trained by the Ellendale crew. There are also six EMRs, or emergency medical responders. Bartsch’s assistant chief is Dale Boverhuis, and two newly-elected captains are Alex Beenken and Jon Barstch. All the positions are volunteer.

Twice a month the firefighters meet at the Geneva Fire Hall. They train on the first Monday, and do the business meeting and more training on the second Monday. Then there’s the countywide fire association meeting once a month that four or five from Geneva attend. And there are medical trainings on the fourth Monday.

And those are just the trainings — add to that all the calls the department responds to and it ends up being quite a time commitment. The department had a record 63 calls in 2012, and about half were medical calls. Then there are fires, grass fires, assistance to other departments and crashes on the interstate, to name just a few of the kinds of calls.

“We do it because we care,” Bartsch said.

His captains, Beenken and Bartsch, agreed that they enjoy helping others and serving the community. Both said they also appreciate the support they get from other fire departments in the county. All 16 of the county’s fire departments have mutual aid agreements, so Bartsch said no one ever worries about boundaries or stepping on each other’s toes.