How did 4 Seasons …become 3 companies 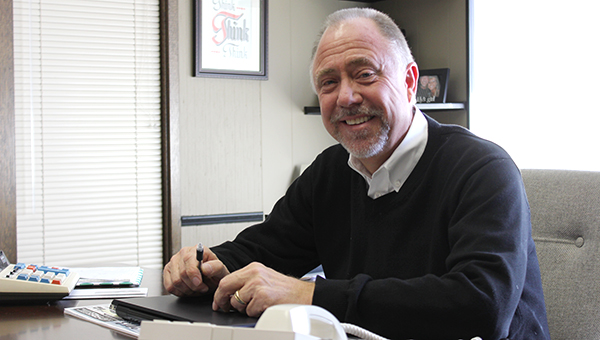 David Nelson, owner and president of 4 Seasons Companies, sits at his desk in 4 Seasons Vacations Inc. on Clark Street. 4 Seasons Vacations has been planning trips and tours for customers in Minnesota, Iowa and South Dakota since 1967. –Colleen Thompson/Albert Lea Tribune

Three sectors to better serve its customers four seasons a year. That’s what the 4 Seasons Companies has sought to bring to Albert Lea for the past 52 years through its travel, coffee and advertising sectors.

4 Seasons Companies was started in 1961 by Lolly Nelson, who is now 92 years old and still works at the company. He was joined by his son, David, in 1980. David Nelson is the current owner and president of 4 Seasons Companies.

“These were new ideas in the 1960s,” David Nelson said of the businesses his father founded. “He saw a need for it.”

With an endless need for business advertisements and promotions, infinite combinations of logos, products, styles and colors are needed, as well. Calendars, pens, backpacks, mugs, bags and a full line of clothing are just some of the 750,000 items that 4 Seasons Advertising has available. All embroidery and screen printing items are done on location for fast turn around.

Any business trying to market outward knows the importance of meeting the needs of a wide audience. But the small-town, local customers are what help keep the company going. They’ve been coming back to 4 Seasons for years, Nelson said.

Lolly continued expanding his footprint in the business world by starting 4 Seasons Coffee Co. in 1966.

The coffee company delivers to Minnesota, Iowa, South Dakota, Wisconsin and Illinois with nine service routes throughout the five states. A 4 Seasons Coffee sales representative visits each business once every two weeks to a month to make sure that the equipment is clean and everything is working properly.

“We make sure someone stops and rotates the coffee stock at each business,” Nelson said. “And our coffee is roasted fresh every time we order.”

“I do what I can to market to this area and other states,” Nelson said.

The company makes sure that they always have fresh and 100 percent Arabica beans that give 4 Seasons Coffee its signature taste.

The third and final sector, 4 Seasons Vacations Inc. was started in 1967 by Lolly. In the 1960s, travel agencies were almost unheard of.

“He founded it with the philosophy that Albert Lea could use someone to help them with travel,” David Nelson said.

“Everyone has a lot of experience,” Nelson said. “That’s important to customers.”

Alaska, the Canadian Rockies and Hawaii are all popular destinations for group tours, which are prepackaged vacations with itineraries and sight-seeing locations laid out. 4 Seasons Travel has trips to Glacier Park, Niagara Falls, Mexico, Australia, Europe and China available, as well. The agency also features motorcoach tours of different cities all across the United States.

Whether it’s a travel itinerary for an individual’s vacation, a couple’s getaway or someone just seeking the thrill of a guided journey through a foreign place, this travel business wants to help. 4 Seasons Vacations aims to plan the trip of a lifetime.

“We’re a big company, but we try to make it a small company feel,” Nelson said. “We have a reputation for providing service to customers.”