It’s back up, running and expanding 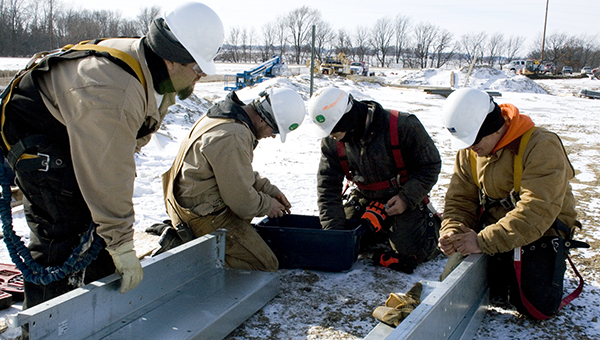 Four contractors work on a steel beam in early February as part of an upgrade to the Renewable Energy Group Inc. facility near Glenville. –Sarah Stultz/Albert Lea Tribune

The once-shuttered biodiesel plant near Glenville has come a long way in the last few years.

By the end of this summer, the Renewable Energy Group Inc. plant will be outfitted with more than $20 million in upgrades.

The upgrades will allow the 30-million-gallons-a-year facility to make diesel from low-grade fats, oils and other natural resources that would normally take longer to refine, rather than soybean oil and other types of refined materials.

REG-Albert Lea Plant Manager Bryan Christjansen said the facility will have a fatty acid stripper, which allows the company to take any feedstock that is normally high in fatty acid, strip that fatty acid off of it and then produce biodiesel with what is left over. 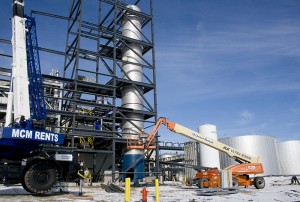 Contractors work in early February to install more than $20 million in upgrades to the Renewable Energy Group Inc. facility in Glenville. One upgrade is the addition of a fatty acid stripper, seen in center.

It will also have new distillation units in place that will produce a cleaner biodiesel than what can be manufactured there today, he said.

“To the best of my knowledge, no other facility will have this combination,” Christjansen said. “Some have one or the other, but we’ll have the combination of both.”

There will also be a new gas line, cooling towers and fuel tanks, among other upgrades.

“This plant was originally built for just soybean oil,” he said. “Now we’re going to be able to do a lot more variety.”

REG bought the plant in the summer of 2011 after SoyMor Biodiesel LLC suspended production in 2008 due to high prices for soybean oil.

The plant started up again in 2011, and construction began in August 2012. 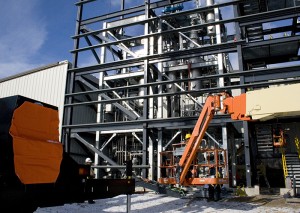 Contractors work to install distillation units at the REG biodiesel plant a mile west of Glenville.

Christjansen said there are currently 22 employees with additional staff expected after the upgrades are completed. Many of the current employees were SoyMor employees who had been laid off.

Three major contractors have been hired for the construction: Todd & Sargent of Ames, Iowa; Interstates Control Systems of Sioux Falls, S.D., and the Baker Group of Des Moines.

He said he expected as many as 60 workers to be working on the project by the end of February.