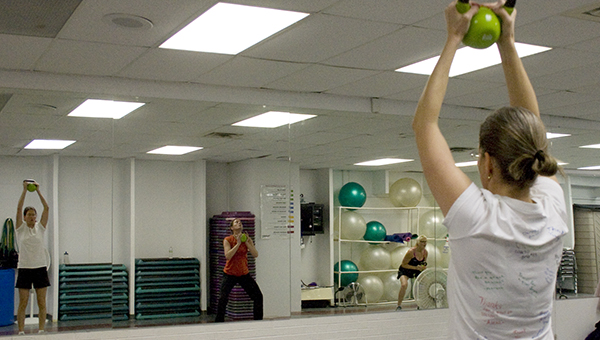 Sophie Ehrhardt lifts a kettlebell high above her head during an intense kettlebell workout led by instructor Kathy Johnson at the Albert Lea Family Y. During the 45-minute class, participants do circuits that include movements such as: lunges, squats, push-ups and planks. –Colleen Thompson/Albert Lea Tribune

One by one, exercisers entered the room, water bottle and gym bag in hand. The room was cool and bright, with energetic music playing in the background. Each participant was greeted with a smile and a happy “hello” from the instructor.

For some, coming here was a health habit they maintain. For others, it was their first time. They were all different ages and at different skill levels, but all came for one purpose — to get an intense kettlebell workout.

“This is a very efficient workout,” said instructor Kathy Johnson of the Albert Lea Family Y. “It’s more intense so it’s equal to a longer workout.”

So what’s a kettlebell and why is working out with them becoming a fitness trend?

Kettlebells were first seen in Russia in the 1700s, but they have made a huge comeback in the last decade. They were created to combine strength, cardiovascular and flexibility training. They have a center of mass that extends beyond the hand. This allows for swinging motions that works the arm, wrist and core because of the shifting fill material. Different weights are available based on skill, the exercise and strength level. They can be anywhere from 5 to 150 pounds. 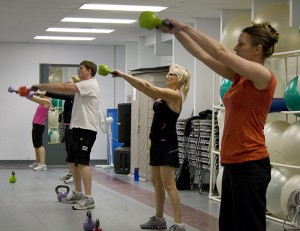 “Kettlebells have the weight at the bottom of handle so you can swing them, and that motion is conducive to everyday life,” said Family Y Sports and Fitness Director Susie Hulst. “It’s momentum-based motion.”

She said that sets them apart from free weights.

All throughout the 45-minute class, Johnson yelled out both instructions and encouragements.

“Use your hips to thrust the kettlebell!”

The 12:15 p.m. class was done in a circuit. There were three different exercises, repeated three times, held for 30 seconds each. The circuit included 30 minutes of cardio and 100 percent core work. Lunges, arm swings, burpees, push-ups, planks, squats, horizontal elbow-to-knees, Russian twists and figure-eight movements through the legs were all incorporated into the workout.

“You might not feel it all the time, but you’re working your whole body,” Johnson told the class.

“These are working your legs, but your arms are pretty much along for the ride.”

“Stay with me, guys! I know you’re getting tired, but you can do this!”

“Speed is not important; it’s form that matters.”

Kettlebells are a worthwhile endeavor when correct form is put forth, but they do require some skill and incorrect movements are costly.

“You can’t just jump right in because it does take some guidance,” Hulst said. “There are a lot of things you can do wrong, and if you workout poorly you will get poor results.”

With several one to two-minute water breaks, the six participants stayed hydrated and pumped up even throughout the strenuous requirements. Johnson ended the class by having the six attendees do stretching and breathing exercises on their mats and in an upright position. Each exerciser packed up with a water bottle and bag in hand and along with a tired, sweaty body, a newfound accomplished feeling.

Feelings of success, along with physical improvements, are what every attendee hopes to achieve. Johnson loves hearing success stories of participants. She recalls a man telling her about how much progress he’d seen in his older relative since she started attending kettlebell classes. The woman was physically stronger and had obvious shoulder definition after five weeks of regularly attending classes. Johnson also smiles when people continuously return to the class, and she sees improvements in them firsthand.

“People who have been coming for a while start to lift heavier weights and really push it to the next level,” Johnson said.

The Albert Lea Family Y staff knows the benefits of a thorough kettlebell workout. It started holding kettlebell classes in the spring of 2012, and has been running year-round ever since. One class a week for seven weeks is $10 for members and $20 for non-members. Check with the Y for class times, which seek to accommodate working parents.

Hulst said the kettlebell trend will stick around for a while and expand.

“I see people mixing it with other workouts, like kettlebells along with strength training and lunges,” she said.

And with everything that an exerciser hopes to achieve available for $10 and 315 minutes, there’s a lot to be crazy about.

5 reasons kettlebells should be part of your next workout