Kiester Courier-Sentinel gets a new owner

The Kiester Courier-Sentinel has a new owner and is going through changes.

Nicole Swanson bought the weekly newspaper for an undisclosed price and became the publisher on Sept. 1. She replaced Cindy Matson. 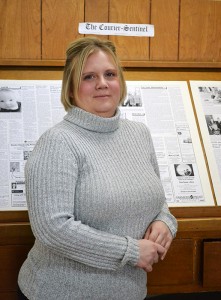 Now the paper with a vine-covered building in this Faribault County town is online and even has a Facebook page. Swanson said the paper has increased its size to be consistently 10 pages and is focusing its coverage on the towns and people within the United South Central School District.

She said the paper traditionally has served Kiester and Bricelyn but is branching out to the communities of Wells, Freeborn, Easton, Frost and Walters. She said they have been covering activities in the USC School District and St. Casimir Catholic School.

Swanson worked locally for another newspaper for about three years before purchasing the Courier-Sentinel.

“I always liked the newspaper industry. I like writing, creating and marketing,” she said.

The newspaper still publishes its obituaries on the front page. But with the website, it has the ability to get the word out swifter about a coming funeral and can reach people outside the circulation area.

The circulation of the newspaper is about 1,400. The staff still cuts and pastes its pages before sending them off to a printer in Blue Earth. Swanson said she has plans to upgrade to using computer software to design pages.

A big issue in Kiester has been the grocery store that closed June 30 to reopen. A group of citizens is looking into setting up a community-based nonprofit to run the store. They selected the name Kiester Market.

In Bricelyn a major issue has been looking at sharing services with other cities.

The leading place to find the news for these communities is the weekly paper that serves them.