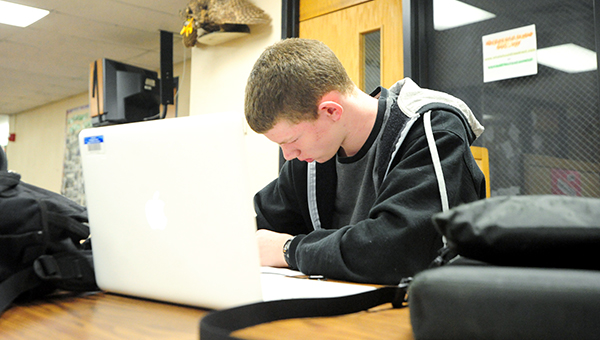 Fifteen-year-old Scott Hengesteg listens to music on his laptop in the library at Northwood-Kensett High School while working on homework. –Brandi Hagen/Albert Lea Tribune

Tom Nugent, Northwood-Kensett’s superintendent, was a senior in high school in 1965.

The school had two computers, and they took up the space of an entire room. When he got to college and even after he graduated from college and became a high school teacher, computers were nowhere to be seen in the schools.

“It didn’t feel right to me,” Nugent said. “I just kept thinking back to that high school that I graduated from.”

As he became a part of the administration in the Northwood-Kensett School District, Nugent pushed 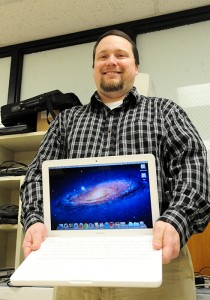 Ryan Welch, the director of technology for Northwood-Kensett schools, holds up a laptop that students use as part of the school’s laptop program.

to have cutting edge technology available to the students and teachers.

“Technology has become this incredible learning tool, not just a luxury,” Nugent said.

Nugent said he reads magazines and articles about different forms of technology and then asks the school’s technology staff, Amy Renwick and Ryan Welch, how to integrate it into the school.

At first, the push resulted in three or four computers being installed in the schools. Within a year Nugent said every teacher had one.

With school board members and staff excited about Nugent’s ideas, too, the vision didn’t end there.

In December 2010, after filling out paperwork and paying an insurance fee, students in grades 4-12 were given laptops to use at school and at home.

About the same time, it was time for the district to review its curriculum and it was decided to integrate online textbooks in the classroom.

In addition to online textbooks, the students and teachers use an online program called Admoto. Admoto allows students to turn in assignments over the Internet, have group discussions with their classmates and view tutorials and follow links as supplemental resources to their learning topics.

One student, Logan Benson, said having a program like Admoto and being able to access it from his own laptop wherever he goes makes him feel like he’s more connected to his teachers.

“In a traditional classroom, the teacher would have given the information, there would have been learning activities and it would have ended when the bell rang,” Faugstad said. “Admoto makes it so easy to connect with students from the teacher perspective as well.”

With access to the supplemental resources, teachers like Beth Butler said she finds her students pick up the material faster and also help each other learn more.

“We hear often at professional activities that we need to become less the sage on the stage and instead become the guide on the side,” Faugstad said. “That has really happened more with the laptops.”

The laptops have also allowed the students to show more of their creative sides.

Student Rosalta Cansino said she really enjoys being able to use programs like iMovie and Garage Band.

While the laptop initiative for the most part has been a smooth transition, staff and students have had to overcome minor bumps along the way whether it be classroom management, understanding a new program or even dealing with a computer glitch, but Nugent said there have been no major negatives.

“It’s nice turning a dream into realities,” Nugent said. “It’s really pretty cool to see where we were and where we are and then try to promote the vision of where we’re going to go next.”

And, while the cost of having the laptop program is about $88,000 per semester, Nugent said it’s the right decision.

“You’ve got to realize that technology is an equalizer in education,” Nugent said. “We might be able to offer the same classes Ankeny offers or a large school in Indiana or California someplace. But the people graduating from here have to compete for the jobs across the nation.”

To further advance the school district, portable iPad labs have been made available this year for students in kindergarten through third grade.

“We’re experimenting with K through three because we have to make that decision for the next vision,” Nugent said. “It may be laptops or some other new technology tool or toy, but we aren’t sure yet.”